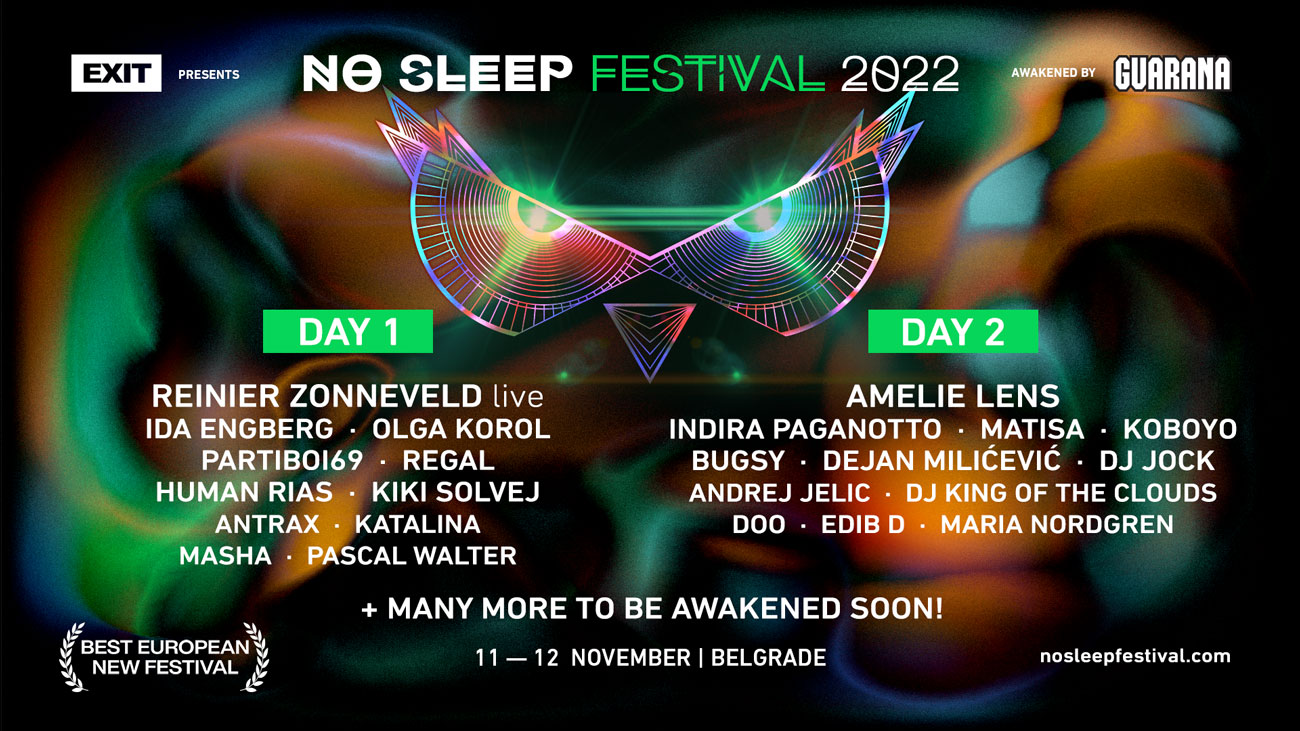 The most sought-after techno stars of the new generation and ticket-sales record holders Amelie Lens and Reinier Zonneveld are coming to this international festival, which won the title of Best New European Festival a few years ago, while Spanish psy-trance-techno star Indira Panagotto and Australian showman Partiboi69 will make their Belgrade debuts!

The rising Dutch star Kiki Solvej, Madrid maestro Regal and the new king of the Paris underground Koboyo are also coming to the Serbian capital, as well as the universally loved Swedish activist and DJ Ida Engberg! She will be joined at the Drugstore club by the Italian rising star Matisa and the German DJ and EXIT ambassador Human Rias! Belgrade’s Silos, connected via a pedestrian path to the Hangar, will host the Ukrainian minimal-techno heroine Olga Korol, Art Director of the Milan club Tunnel DJ Bugsy, Strasbourg DJ Pascal Walter, Maria Nordgren from Sweden, and Masha from Ukraine.

The regional and local scene will be represented by Balkan DJ bard Dejan Milićević, DJ Jock from Split, Edib B from Sarajevo, Andrej Jelić from Mostar, Katalina from Novi Sad, and well-known Belgrade acts Antrax and Doo. Due to the perpetually high interest in the No Sleep festival, the current ticket prices, which offer savings of up to 40%, will be valid until Friday, October 28th at the latest, or until the very limited supplies run out!

The afterparties at the iconic Belgrade club Drugstore have been indispensable to the No Sleep festival for years. The star of the first No Sleep morning is Ida Engberg, a Swedish techno and deep house producer and DJ with more than two decades of experience on the electronic music scene. She earned a huge following and an international career with her cult track „Disco Volante“ and a remix of „Sisters of Night“ by Depeche Mode. Since 2011, she has released music for the famous Drumcode, including tracks like „Blue Yonder,“ „Junoverse,“ and „Unanswered Question“ in collaboration with Adam Beyer. The first morning at the Drugstore club will be opened by Belgrade DJ Antrax, known for his marathon minimal, house, and techno afterparty sets, and closed by German-Iranian DJ Human Rias, resident and booker of the former cult Munich club MMA (Mixed Munich Arts), resident of the No Sleep festival and friend of EXIT.

The second day of the festival at the Drugstore club will be marked by the WB Community party, hosted by DJ King of the Clouds. The Sunday afterparty will start with Andrej Jelić, one of the founders of the Bosnian-Herzegovinian club scene, known for hours-long afterparties and the Roof Aw project, within which he organised parties in unique locations. The central part of the afterparty is reserved for Matisa, who comes from Florence, the Italian city of art that inspired her interest in music and fashion. She made her debut with the EP „Organza/Honey Comb,“ introducing the world to her musical style, which includes house, disco, and electro. The marathon No Sleep weekend will be closed by the regional and local audience favourite Dejan Milićević. He is responsible for forming the local electronic scene, and more than two decades later, his love for high-quality techno and house has not diminished. From numerous releases through his publishing house Tit0 – Tit Zero Records to performances at major European festivals, Dejan Milićević brings a well of experience to the closing hours of this year’s No Sleep.

Standard festival tickets are on sale for RSD2,290, with a 40% discount, while VIP GOLD tickets cost RSD3,990. Standard one-day tickets can be purchased at a gift price of RSD1,590, offering a saving of 40%, while the price of a one-day VIP GOLD ticket is RSD2,790. Due to overwhelming interest and demand, current ticket prices will be valid no later than Friday, October 28th, or until the limited contingent is sold out.

Tickets are available here, as well as through the Gigs Tix sales network, online and at physical sales locations.