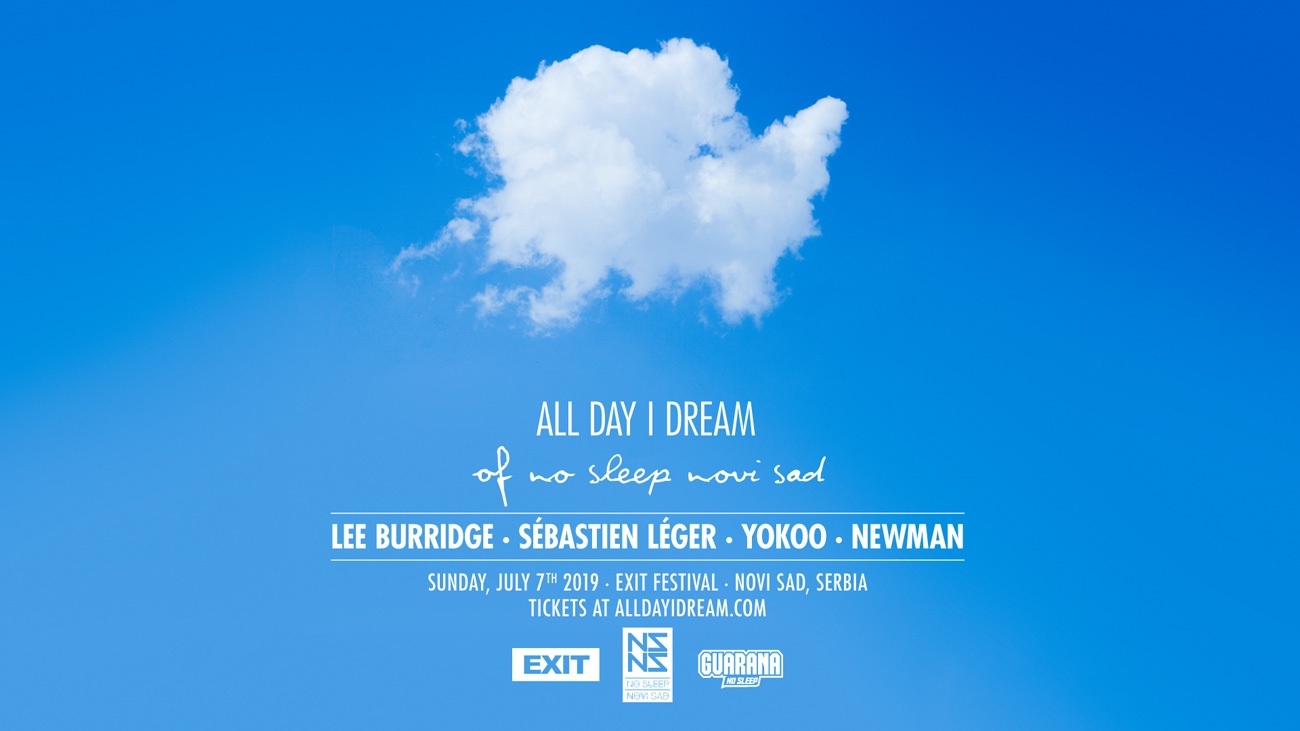 The line-up will be personally picked by its DJ guru Lee Burridge, who is coming to EXIT Festival on Sunday, July 7, along with ADID’s prominent artists like Sebastien Leger, YokoO and Newman! The No Sleep Novi Sad stage will step out of its usual format of presenting leading clubs of the world, such as fabric, Tresor, Bassiani and many others, with hosting one of the most recognizable global music events inside the walls of the stunning Petrovaradin Fortress.

This will also be a special edition for All Day I Dream, since this music marathon will actually start during the night, from 10pm at the No Sleep Novi Sad stage and slowly build on up to one of EXIT’s trademarks, the sunrise that starts as early as 4am. The next four hours at the festival are always the most intense, but even though 8am marks the end of EXIT’s official program, the sleepless “daydreaming” experience will continue. The second part of the All Day I Dream marathon and an official EXIT Festival After-Party will take place at a nearby venue, also inside the Fortress, running all the way up to those afternoon hours when ADID parties usually start. Local support for the first ADID team will be the Belgrade-based selector Nevena Jeremić who will have the honor of opening this special event within this year’s #NSNS2019 program, while the leading Bosnian DJ duo After Affair will welcome the “dreamers” at the next venue.

From its beginnings as a concept of daytime parties on Brooklyn rooftops in 2011, all the way to its international sensation status today, All Day I Dream is not just a set of DJ sets through which a thread of Burridge’s vivid emotionalism arises – it is also a truly fantastic experience for all the senses, as well as a spiritual experience with magical music and a striking atmosphere. Lee and his team visited some of the most fascinating destinations on Earth, spreading the spirit of community, spirituality and warmth, both musical and personal, considering this to be most important thing, somehow lost in the growth of the electronic scene today.

In charge of leading this sonic journey, from true euphoria, via daydreaming, all the way to hypnotic dancing, will be legendary English maestro Lee Burridge, without whom the landscape of the contemporary electronic scene would look drastically different. This creator of possibly the most popular sound on the music scene today, which combines house, techno and progressive, was in a group called Tyrant with Sasha and Craig Richards. By releasing material for Global Underground, Innervisions, Hooj Choons and ADID, Burridge cemented his position of one of the most influential DJs at the moment. He made his dream about a party which would combine impeccable house with spiritualism come true when he started his “All Day I Dream” series, which is currently one of the most famous ones in the world of electronic music. Thanks to his unusual musical passion and sets which stop the passage of time, even the famous Burning Man today cannot be imagined without the musical guru with a career spanning three decades.

One of the most distinguished French artists, Sebastien Leger, got his first residency already at the age of 15, and, with his eclectic approach to music, he’s been successful for over 20 years, with four studio albums and countless EP releases for labels such as ADID, Einmusika Recordings, Systematic Recordings, SCI + TEC and his own Mistakes Music.

Characteristic French charm and a dose of Australian directness is brought by YokoO, who once said that he would love to collaborate with the headliners of this year’s Exit, The Cure! Apart from the releases for ADID, his name can be found with respectable labels such as Musik Gewinnt Freunde, Kindisch, Get Physical, Moodmusic and Plastic City. Precisely due to this refined musical intuition, he was noticed by Burridge, and he built his status of one of the most sought-after DJs on the foundation of his honest passion for music.

Deep house introduction will be brought by Newman, the first performer who released for Burridge’s new label TRYBESof, and the EP “Tears of Rain” released at the beginning of the year, was the best way to showcase just how layered his talent is. The one to perform with him in the introductory part will be Nevena Jeremić whose gift for eclectic journeys through emotions made it possible for her to be personally selected by Burridge to welcome his crew of music dreamers at EXIT 2019.

With the arrival of the world-famous ADID party for the finale of EXIT festival, the program for this year’s No Sleep Novi Sad stage has been completed! On the first festival day, July 4, the beloved stage will welcome the fascinating techno club MMA – Mixed Munich Arts and many friends of the club, such as I Hate Models, SHWD & Obscure Shape, Boston 168, Black Lotus, Martina Hilber and Ana Rs, while on Friday, July 5, festivalgoers will be greeted by a world-class crew, performing under the banner of the globally recognized Brazilian club D-Edge from Sao Paulo, Blawan, Giorgia Angiuli, 999999999, BLANCAh, Renato Ratier, Lag + Monosaccharide and Duc in Altum! The third festival day, July 6, will see the arrival of DVS1, JASSS, Dadub, NDRX, Zitto and Klaus, coming together for the showcase of the notorious Georgian club Bassiani from Tbilisi!

Don’t forget that EXIT’s favorite group offer is back: friends who buy four tickets together receive one ticket as a present! The “4+1” offer will last until a very limited number of packages are sold out! EXIT tickets are available at exitfest.org, and for those who wish to bundle them with accommodation and local transfer, there are also packages starting at €145. Default accommodation is the festival camp located on the city beach, while hotels can be booked through EXIT’s official tourist agency at exittrip.org.