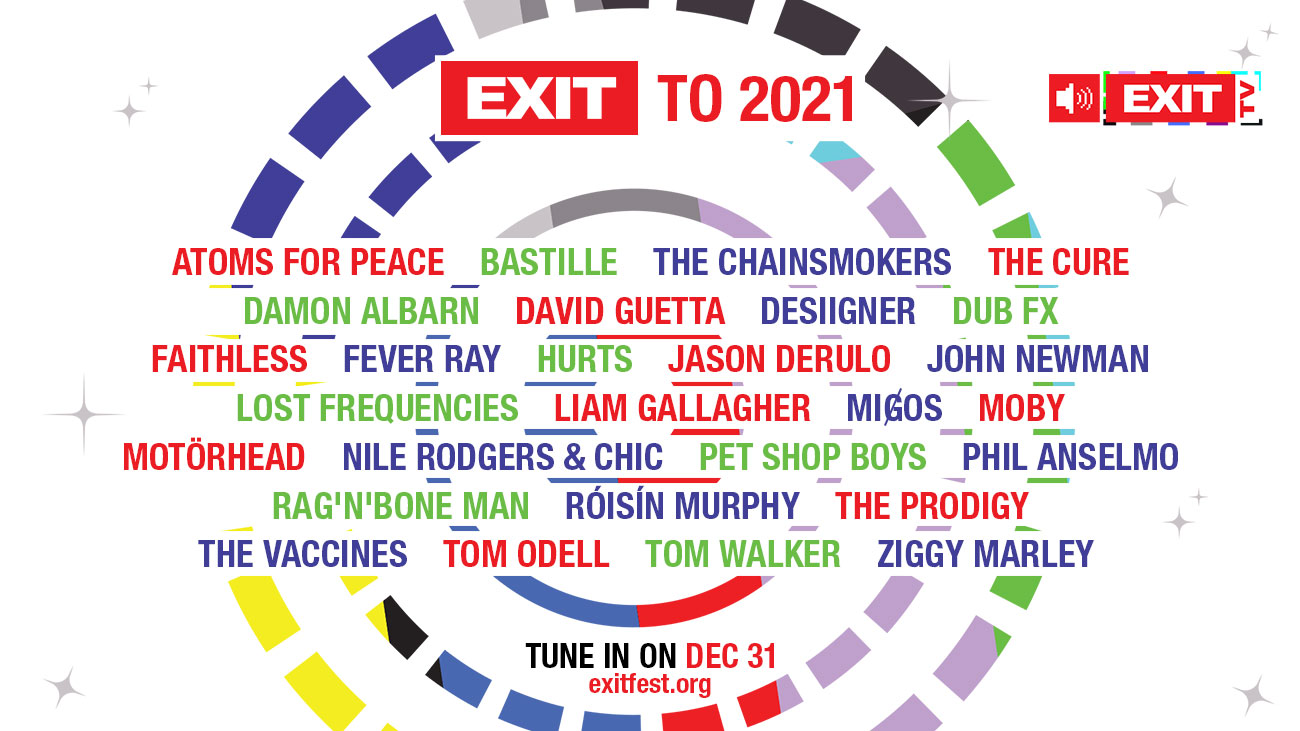 An eclectic mix of historical performances from Main Stage titled EXIT to 2021 will unite fans around the globe on the 31st of December in the best wishes for the New Year, which we all expect to be incomparably better than the previous one. “Bearing in mind that the forthcoming holidays will be unique in the fact that the vast majority of people will spend them at home in very specific circumstances, we have decided to do what we do best — offer people an EXIT from the current situation, share with them some of the most important moments in EXIT Festival’s rich history and entertain them in the best possible way during New Year’s Eve” – said Maja Starčević, program manager of the Main stage of EXIT festival.

We have a true multi-genre spectacle ahead of us at two well-known addresses — EXIT Festival’s Facebook and YouTube pages. The show will consist of EDM, hip-hop, reggae, and funk beats, as well as fierce guitar riffs and pop romance! Some of today’s biggest global superstars, whose performances at EXIT festival have been retold for years, will be in charge of keeping the party going, in conditions we hope never to face again. Numerous performers quickly responded to the invitation to have their recordings used in this special New Year’s Eve broadcast, stating that they are thrilled to be involved in such a project.

The New Year’s Eve hitmakers include David Guetta, The Chainsmokers, Lost Frequencies, Jason Derulo, Bastille, and the unforgettable Nile Rodgers. At the same time, fans of hip-hop culture will enjoy the hits and reminisce about the outstanding performances of greats such as Migos and Desiigner.

To the delight of fans of a slightly heavier sound, there will be no shortage of guitars celebrating the arrival of 2021. We will all have the opportunity to remember the performances of The Cure, Motorhead, and Phil Anselmo, while The Prodigy, Moby, Faithless and Dub FX will set off a bonafide energy bomb. This star-studded line-up will be joined by the legendary Liam Gallagher, who, after his performance on the Main Stage in 2017, called EXIT one of the biggest festivals on the planet!

Ziggy Marley, Damon Albarn, Fever Ray, The Vaccines, Atoms for Peace, Pet Shop Boys, and the unique Roisin Murphy will complete the farewell to the old year with their excellent tunes, while the pop beats will be delivered by some of today’s most distinct vocalists Tom Odell, Rag’n’Bone Man, and John Newman, as well as Hurts, whose management singled out the band’s performance on EXIT Festival Main Stage in 2014, as one of their best concerts ever!

EXIT Festival’s star named the best DJ on the planet!