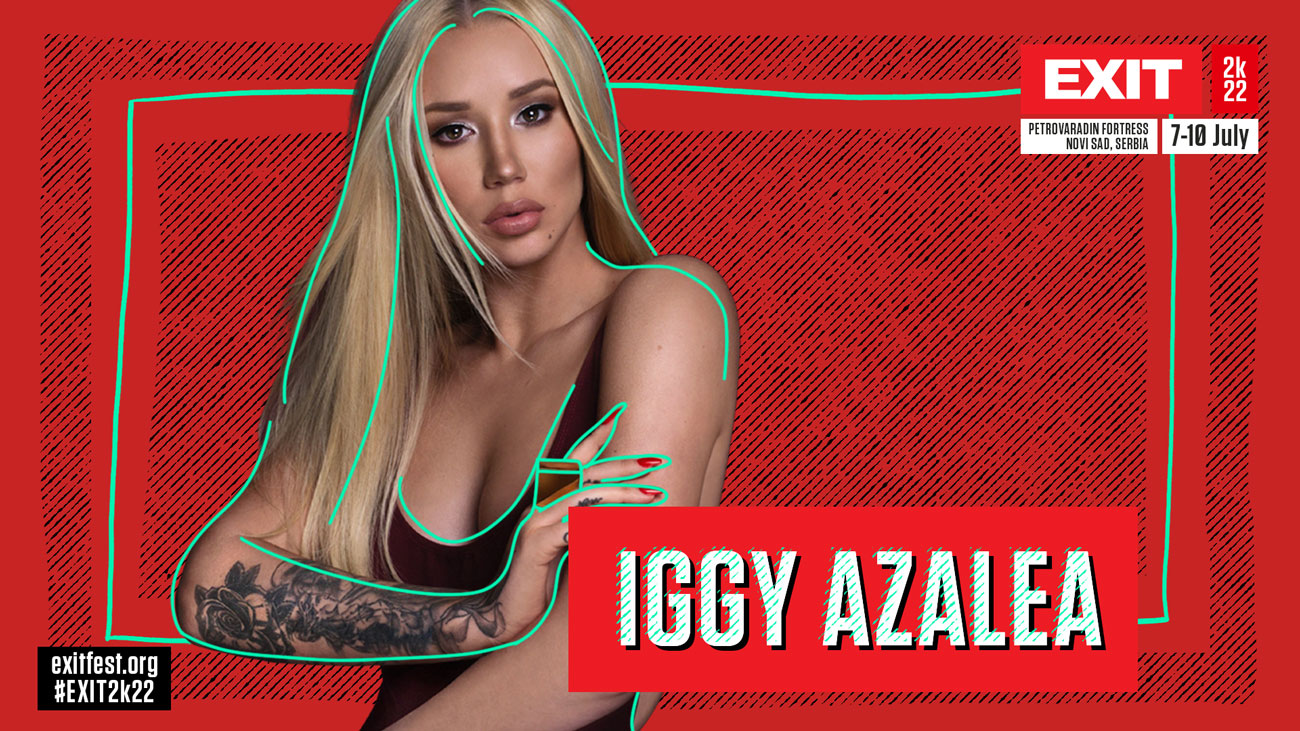 Australian rapper Iggy Azalea, one of today’s biggest hip hop stars, a multi-award-winning artist with over 10 billion streams and as many as 70 million album sales, has been confirmed as a headliner on the Main Stage! Two more names from DJ Mag’s annual Top 10 list will arrive at the Petrovaradin Fortress in July — esteemed DJ and producer Afrojack and the greatest Brazilian superstar Alok, as well as German hitmaker ATB!

They join all the previously announced big names, which include some of the world’s biggest stars, such as Calvin Harris, Nick Cave & The Bad Seeds, James Arthur, Masked Wolf, Joel Corry, Jax Jones, Boris Brejcha, Honey Dijon, Maceo Plex, Reinier Zonneveld, Monolink, Denis Sulta, Mathame, ZHU, ACRAZE, Sama’ Abdulhadi, ANNA, Sepultura, Napalm Death, Marky Ramone and many others. This year’s edition of the EXIT Festival, carrying the slogan “Together. Always!” will take place from July 7th to 10th at the Petrovaradin Fortress, and more big names for the mts Dance Arena will be announced soon! Current prices of standard four-day tickets are in effect no later than end-of-day Friday, April 8th!

New EXIT Festival headliner, the multi-talented rapper Iggy Azalea, has broken through in the past decade as one of the biggest names in the most popular music genre in the world. More than 35 million people follow this musician on social media, along with some of the world’s biggest music stars she has worked with, including Britney Spears, Jennifer Lopez, and Ariana Grande. In June 2014, her singles “Fancy“ and “Problems“ reached the top two spots on the Billboard Hot 100, equalling a record held by the Beatles. The Australian rapper didn’t seem too impressed, saying: “I’d rather be the Rolling Stones“, and started an avalanche. The mega-hit “Fancy” made her the female hip-hop performer with the longest-standing number-one single in history, surpassing the previous record-holder Lil’ Kim. You could sense this artist’s enormous talent in her earlier singles “Pu$$y“ and “My World“, and in the years to follow, she received multiple accolades, including American, Billboard and MTV Music Awards, as well as the People’s Choice and Teen Choice Awards, along with four Grammy nominations.

With the Grammy Award behind him, Afrojack returns to EXIT. He is a highly influential Dutch DJ, EDM producer and songwriter who made his breakthrough onto the international scene with the multi-platinum hit “Take Over Control“ featuring Eva Simons. For years he has been one of the highest-paid DJs in the world, winning an MTV Award and spending a decade as an indispensable member of DJ Mag’s list of the best DJs in the world. His high status is evidenced by the endless list of musical names whose songs he created and remixed, including Beyoncé, U2, Pitbull, will.i.am, Sia, Martin Garrix… He pushed all boundaries with “Hey Mama“, collaborating with David Guetta, Nicki Minaj and Bebe Rexha, and reaching an incredible 1.5 billion views on YouTube! In mid-2021, he released a new song with Guetta — “Hero“. This song was nominated for a Grammy Award, while, a few days ago, he presented another track, “Trampoline“, once again working with the irreplaceable David Guetta but also Missy Elliott, BIA and Doechii. After an energetic B2B set with Quintin at the 2014 mts Dance Arena, this time, he brings his hits to the Main Stage.

Undisputed Brazilian superstar Alok is currently one of the most prominent figures on the global electronic music scene, describing his style as “Brazilian bass” and “dance-pop.” In the last two years, he has produced the hits “Don’t Cry For Me“ with Jason Derulo, „In My Mind“ with John Legend and “Don’t Say Goodbye“ with Tove Lo and Ilkay Sencan, while one of his most beautiful songs is “Hear Me Now“. He has more than 40 million followers on social networks, making him the second most followed DJ in the world, while the prestigious DJ Mag named him the fourth-best DJ in the world in 2021. His remix of the song “Piece Of Your Heart“ received an award in 2019 at the International Dance Music Awards, while he also remixed hits like “Living in a Ghost Town” and “Astronaut in the Ocean”. He is the only Brazilian ever to find a place on the “Billboard Dance 100” list, while Forbes magazine rated him as one of Brazil’s most influential young artists. He had his premiere performance at the Sao Paulo Carnival in 2020, in front of a million people!

André Tanneberger, a.k.a. ATB, is a German musician, DJ, and trance/progressive house producer, with a highly successful career spanning more than 20 years. His debut song from 1998, the platinum classic “9 PM (Till I Come)“, marked an era, becoming the number one single in the UK, and reaching the top of the charts in Australia, Denmark, Greece, Italy, and Norway. The hits kept coming with “Hold You“, “You’re Not Alone“, “Ecstasy“, and “Marrakech“. ATB has been on DJ Mag’s list of the Top 100 DJs every year since 2003. The fact that the song “9 PM (Till I Come),” ATB’s trademark, is still alive today is evidenced by the success of the remake produced by Topic and A7S and then remixed by Tiësto. In a recent interview for EDM.com, ATB said: “It’s always been a goal for me to make melodies that survived over the years.”

Four-day tickets are on sale from 87 EUR +b/f, at a 15% discount. Their quantity is limited and will be on offer no later than end-of-day April 8th.

One-day tickets for Friday, 8th July, including the performance of Nick Cave & The Bad Seeds, are on sale at early-bird prices: regular tickets at 34 EUR +bf, fan pit at 44 EUR +bf, and VIP tickets at 100 EUR +bf.