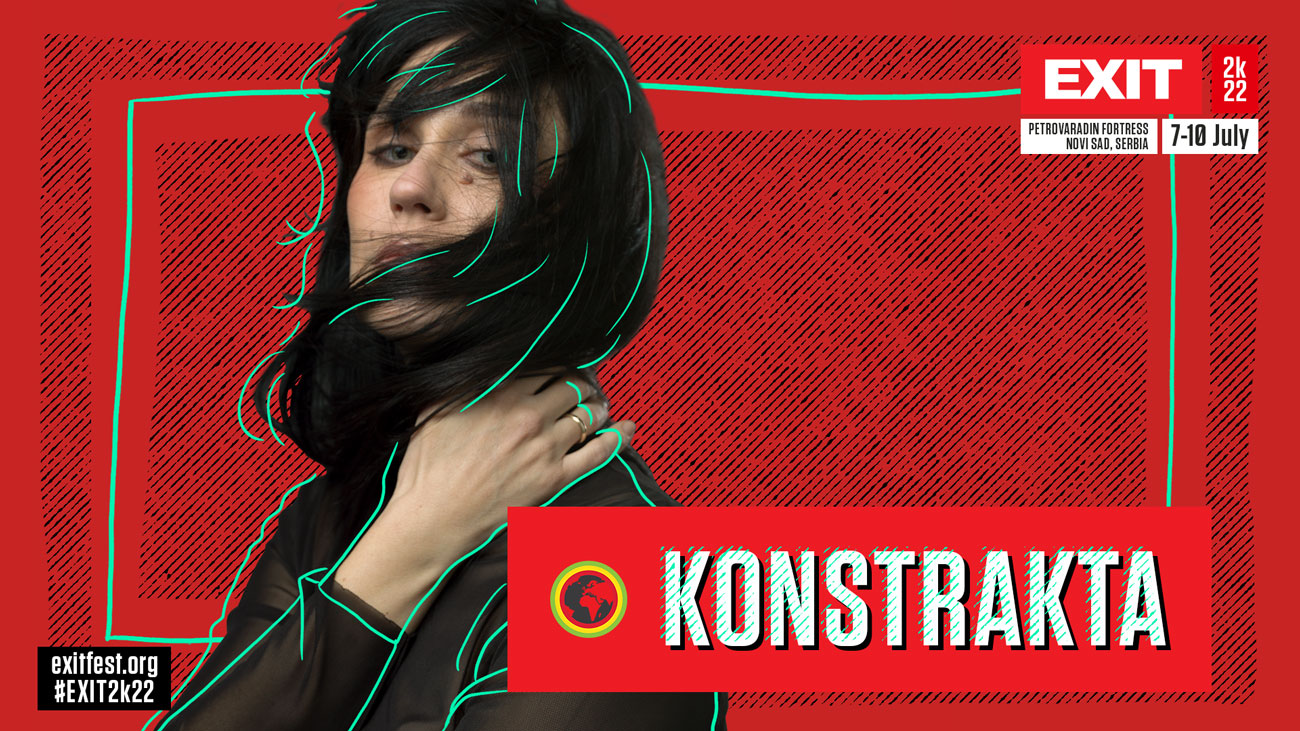 “I have been at EXIT as a visitor, as part of Mistake Mistake and Zemlja Gruva, and even as a host for one year. This year, I will be on the Main Stage as Konstrakta, so see you there,” says Ana Đurić Konstrakta!

Although it may seem that her success happened overnight, Ana Đurić has been on the music scene for 20 years, and at this time, her genius has finally reached its potential. The Serbian musician continues to delight audiences and the media in the region with her atypical song “In Corpore Sano,” which she will perform at Eurovision, representing Serbia.

Those who had not previously followed her independent work have found her authenticity and creativity wholly refreshing and unique. “In Corpore Sano“ is part of the Triptih project, which also includes the songs “Nobl” and “Mekano,” all written by Konstrakta. Apart from socially relevant messages, the triptych also has a visual throughline, conceived by Ana Đurić, along with Maja Uzelac and Ana Rodić.

Konstrakta began her solo career in 2019 with the songs “Žvake“ and “Neam šamana“, both accompanied by genre innovations, as well as original and interesting videos.  Ana Đurić traces her musical roots back to the band Mistake Mistake, with whom she performed until 2007. That year, bandmates Zoe Kida, MC Milovan and Konstrakta formed the band Zemlja Gruva and founded the Gruvlend label and Gruvlend production studio, which became the backbone of all further projects from this collective.

The quality of the journey they have since taken has been evidenced by Gruvlend’s recent collaboration deal with the global publishing house Virgin Music Label & Artist Services, a label within Universal Music.

So far, the band Zemlja Gruva has released two LPs – “WTF Is Gruvlend?“ (2010) and “Šta stvarno želiš?“ (2016) as well as an EP dedicated to Dino Dvornik and several singles with Konstrakta’s songs attracting a lot of attention. Some of the band’s biggest hits, popular all over the region of former Yugoslavia, include “Nisam znala da sam ovo htela“, “Đango“, “Plodni dani“, “Jednom je sada“, “Tuga“, “Mama“.

Zemlja Gruva also opened for Amy Winehouse at her Belgrade concert, and the band has also performed at EXIT. Konstrakta will perform at several events this summer, the first of which will be the Sea Star Festival in Umag, but she plans a special performance for the grand finale of the EXIT Festival on July 10th!

Four-day tickets are on sale from 95 EUR +b/f. When this limited contingent is sold out, the ticket price will increase.

One-day tickets for Friday, 8th July, including the performance of Nick Cave & The Bad Seeds, are on sale at early-bird prices: regular tickets at 34 EUR +bf, fan pit at 44 EUR +bf, and VIP tickets at 100 EUR +bf.

The special spring edition of the No Sleep Festival, held in Belgrade from 8th to 9th April in front of over 15,000 visitors, has opened a new chapter for EXIT. This year as well, members of EXIT’s festival family — EXIT, Sea Star, Sea Dance, Ada Divine Awakening, No Sleep, events in Slovenia and North Macedonia, as well as its indispensable part, the visitors — will be together, free and without borders, as they always should be. EXIT also has a few surprises in store this year, with at least two more events prepared in two new countries. More information about this soon!