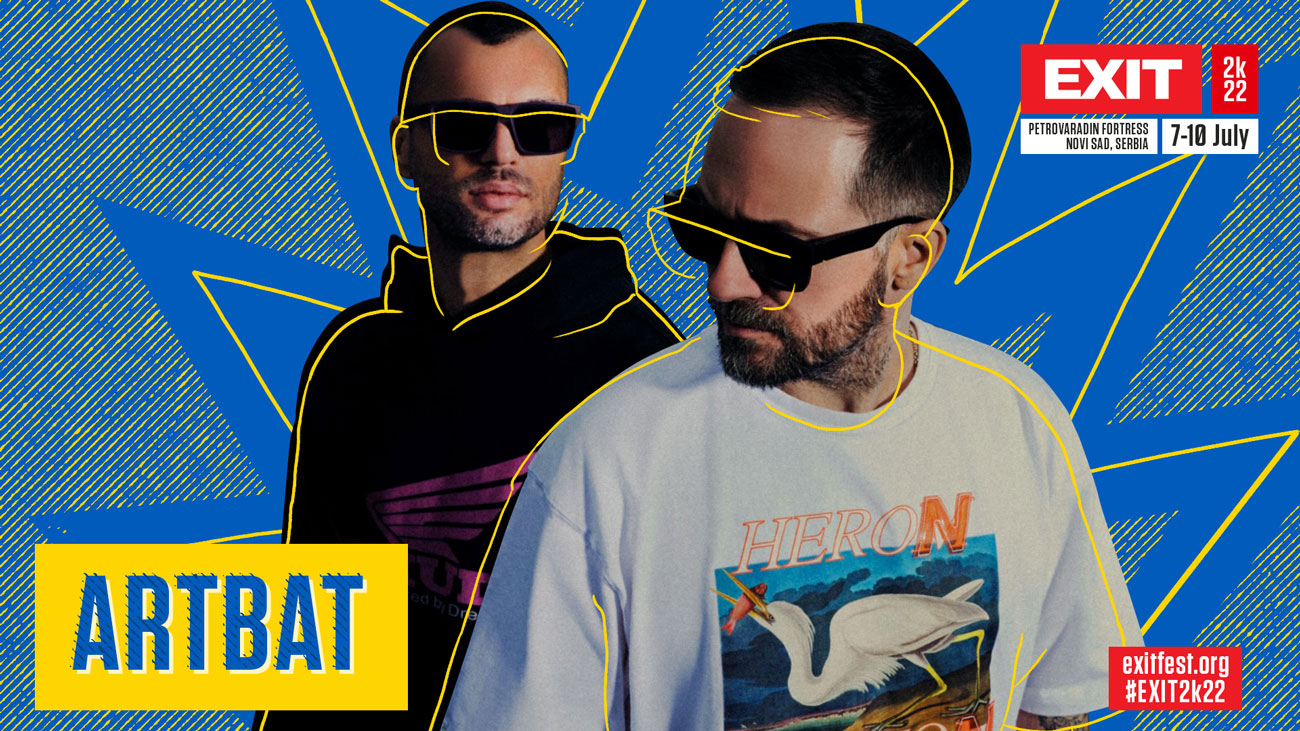 The atmosphere of Watergate, Fabrik Madrid, Possession hard techno parties, as well as the spirit of the legendary Life and Death label will bring DJ Tennis, Dax J, Adana Twins, Andhim, Hector Oaks, Stephan Jolk, SHDW & Obscure Shape, Indira Paganotto, and many others who will perform on the iconic No Sleep Novi Sad stage. Most of the mts Dance Arena and No Sleep Novi Sad new acts are coming to EXIT for the first time, and for some, this will be the first performance in Serbia.

The Ukrainian DJ duo ARTBAT will share a remarkable encounter with the EXIT audience this year because they will play the closing set of the mts Dance Arena and the entire festival. They fully deserve it – years of work have made them one of the most sought-after acts on the scene, and Beatport Top 100 Melodic House & Techno chart has, for months, featured their remixes of “Returning to Oz“ and “Age of Love“ (in collaboration with the great Pete Tong), as well as “Horizon“, a song they released less than six months ago.

The EXIT audience will also get a chance to see the skills of techno patrons, DJs and producers Adam Beyer and Enrico Sanguliano, with the latter performing at the Dance Arena for the first time. Their first musical steps during the ‘90s and the quest to perfect the techno sound have naturally led to a collaboration of the two through Beyer’s Drumcode Records, one of the most influential labels in the world. They released a joint track, “Preset Heaven”, in 2017, and in 2019, they stood behind the DJ decks together for the first time during the Drumcode showcase at OFF Sonar, delivering a set that DJ Mag called “epic.” Now it is time for just such a set at the Petrovaradin Fortress! 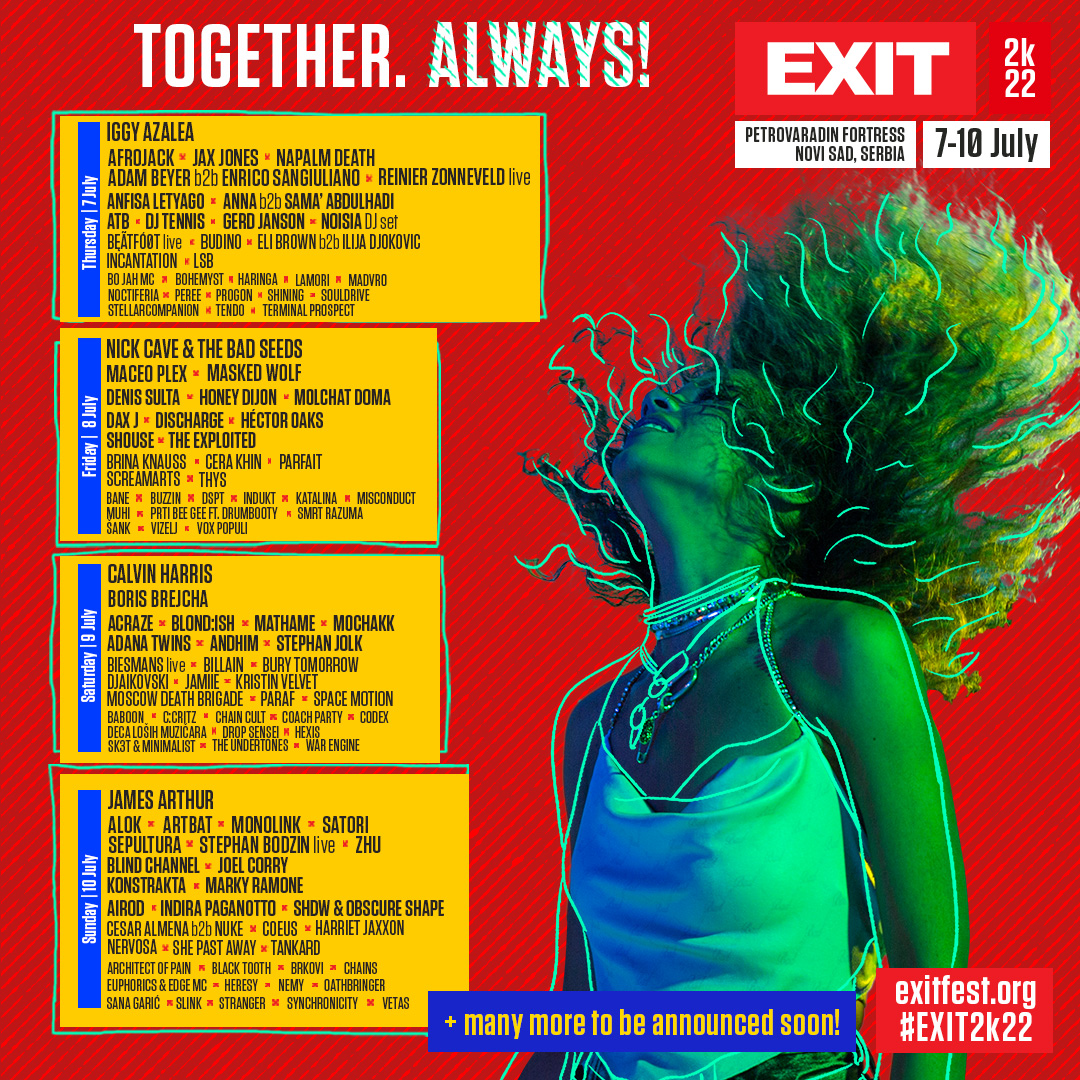 Electronic music virtuoso Stephan Bodzin also arrives at EXIT for the first time, bringing an authentic live act. The composer/producer uses analogue synthesisers and drum machines in his performances, so he can be aptly described as a “one-man techno orchestra“. He has once again confirmed his status as a techno superstar with his latest album “Boavista“, while the scene’s universal love for Bodzin was crowned by a double album of remixes signed by the entire global A-list, including Solomun, Boris Brejcha, Maceo Plex, Hernan Cattaneo and a slew of others.

Blond:ish is also coming to EXIT for the first time, bringing an excellent house sound! She is known for Abracadabra parties (she says “a good party can change the world”), the Bye Bye Plastic Foundation and advocating for more environmentally conscious parties.

Despite his youth, Mochakk has already made a name for himself in tech house, currently the most popular genre of electronic music. This Brazilian producer has over a million followers on social media, thanks to his incredibly energetic DJ sets, whose clips he is happy to share with his Instagram followers. The local Afterlife label act, Coeus, and another representative of the local scene who has surpassed its boundaries, Space Motion, will also perform at the mts Dance Arena, while Eli Brown and Ilija Djokovic will join forces for a great B2B driving techno set.

According to the traditional concept of presenting the world’s leading clubs, No Sleep Novi Sad brings the spirit of Berlin’s Watergate-a and Fabrik Madrid this year. Watergate will celebrate its 20th birthday with the audience at the NSNS stage and adorn the Fortress with the club experience it is known for – unmatched LED lighting, the tunnel-like main dance floor, a terrace overlooking the river, and of course, an unprecedented line-up. The honour of Watergate will be defended by Adana Twins, Andhim, Stephan Jolk, Biesmans live, Jamiie, and Kristin Velvet.

During its 19 years of existence, Fabrik Madrid has positioned itself as one of the 100 best clubs in the world, thanks to its programme, its capacity, and the quality of its sound system. Its star trademark is the CODE parties, which have been held once a month for the past 17 years, and which, according to the organisers, are “more than techno.” This is precisely the experience that Cesar Almena, Nuke, SHDW & Obscure Shape, Indira Paganotto, and Airod will give the No Sleepers.

After an outstanding performance with Kristijan Molnar at the No Sleep Festival in April, DJ Tennis is coming on stage to lead the Life and Death showcase, which will also include Gerd Janson, Budino, Beatfoot live and Stellarcompanion. Although a decade has officially passed since this label was founded, they had a desire to celebrate this milestone at EXIT as well. The No Sleep audience will surely appreciate that since Life and Death events are known for cultivating a specific and intimate atmosphere.

Whether organising parties or festivals, the Parisian underground Possession crew unmistakably caters to hard techno fans, and Dax J, Hector Oaks, Parfait, Cera Khin, Muhi and Katalina will take No Sleepers on a ride at around 140 BPM this time as well.

One-day tickets on sale from May 20th

Four-day tickets are on sale from 95 EUR +b/f. When this limited contingent is sold out, the ticket price will increase.

One-day tickets for Friday, 8th July, including the performance of Nick Cave & The Bad Seeds, are on sale at early-bird prices: regular tickets at 34 EUR+bf, fan pit at 44 EUR+bf, and VIP tickets at 100 EUR +bf.

One-day tickets for other days will go on sale on May 20th.