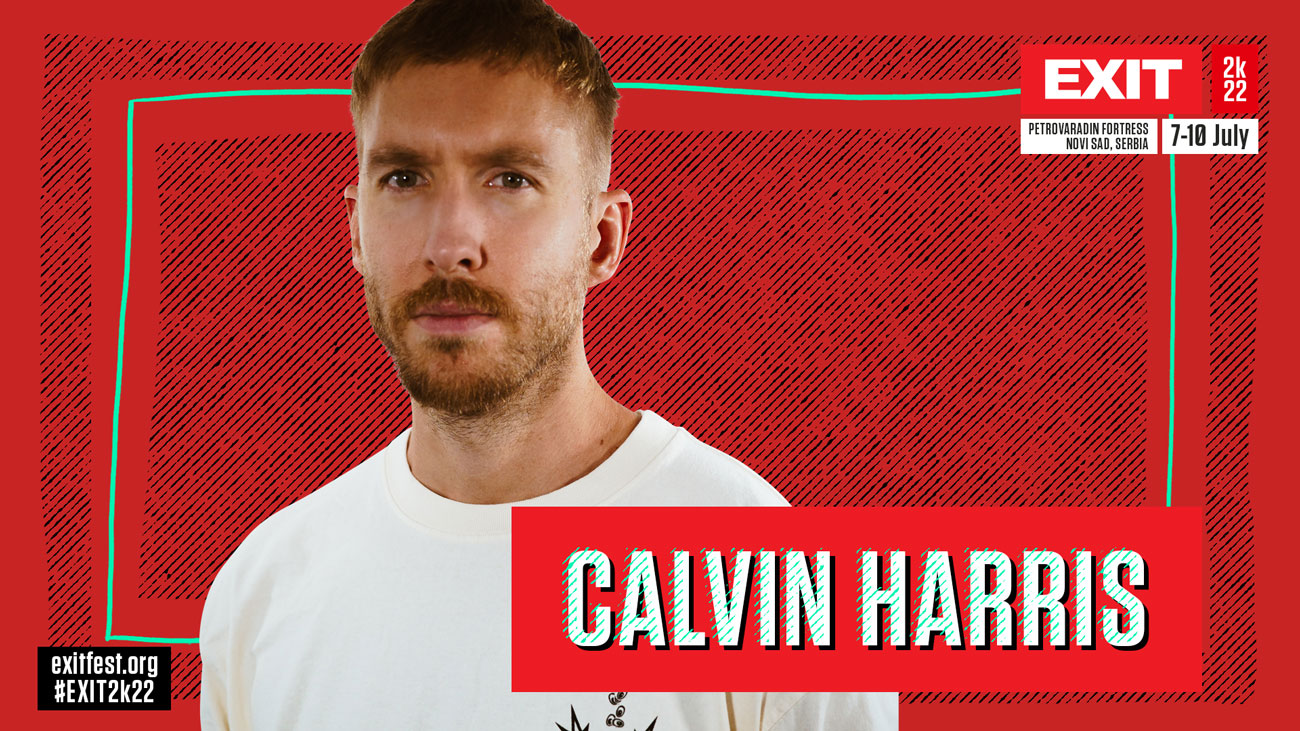 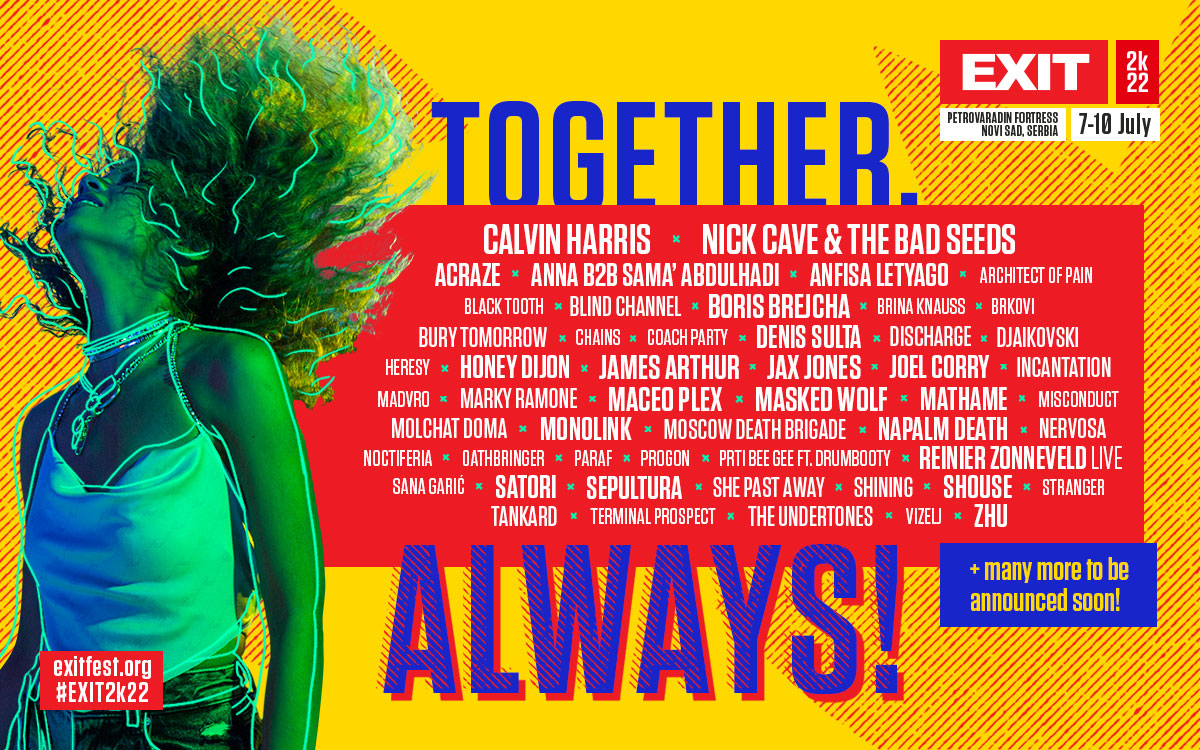 All of them join the previously announced Nick Cave & The Bad Seeds and Boris Brejcha at the new edition of the festival, which will take place from 7th to 10th July 2022, under the slogan “Together. Always!“ Other incredible acts will be announced soon!

Calvin Harris is one of the greatest superstars in the history of the EXIT festival! Festival’s Main Stage headliner has been ranked #1 highest paid DJ in the world by Forbes magazine for six years in a row, earning more than 300 million dollars. This mega-successful producer, singer and songwriter has won 32 of the most prestigious music awards to date, including a Grammy, Billboard, MTV and Brit, with as many as 118 nominations!

Collabs with Rihanna, Ellie Goulding, The Weeknd, Dua Lipa, Pharrell Williams, and Migos are just a few of the timeless megahits that carry his signature. He is known for breaking records and setting standards – his songs have been streamed via video and audio platforms an impressive 35 billion times, and he has surpassed Michael Jackson in the number of songs from one album to reach the top 10 UK Singles Chart.

Ever since he won “The X Factor,” pop, R&B, and soul singer James Arthur has had worldwide attention, and now he arrives at EXIT’s Main Stage, with over five billion views and streams at the time of writing! His interpretation of the song “Impossible” reached #1 in the UK Singles Chart and became the X Factor’s best-selling winning single. This was followed by big hits like “Say You Won’t Let Go,” which also reached #1 on the UK Singles Chart and became one of the most streamed songs on Spotify. “Train Wreck” and “Naked” came next, while his new album “It’ll All Make Sense in the End” reached the top three on the UK Album Chart, like all of his previous records.

Australian rapper Masked Wolf, who is at the top of the Billboard list of most wanted new artists, joins the team of hitmakers on EXIT’s Main Stage. He is the author of the planetary viral hit “Astronaut in the Ocean,” which was named as TikTok’s most popular song for 2021!

Another “YouTube Billionaire” arriving on the Main Stage is British DJ and hitmaker, Jax Jones. His breakthrough into the music scene happened in collaboration with Duke Dumont on the single “I Got U,” which soon reached the top of the UK Singles Chart. After conquering European radio stations, his hit “You Don’t Know Me” with singer Raye was nominated for a Brit Award, and followed by many popular songs, such as “Instruction,” featuring Demi Lovato and Stefflon Don, “Breathe,” and “All Day and Night” in collaboration with Martin Solveig.

Jax Jones and another member of the EXIT 2k22 line-up, DJ and producer Joel Corry, released a joint single, “Out Out,” a cover of the planetary dance hit “Alors on Danse,” to critical and audience acclaim. Joel Corry is one of the biggest new pop stars in the UK, conquering radio stations and fans with his singles “Sorry,“ “Lonely,” and “Head & Heart.”

The two songs that definitely marked the previous year are the club anthem “Love Tonight,” brought to EXIT by the Australian acid house duo Shouse, and “Do It To It,” which will be performed on the Main Stage by Acraze. Zhu will present his megahits “Faded,” “In the Morning,” and “Working For It,” while the heaviest sounds on this stage will be the responsibility of great bands who marked the history of metal and those who lead the contemporary hardcore, new wave, and post-punk scenes — the legendary Brazilian band Sepultura, iconic Birmingham quartet Napalm Death, Blind Channel from Finland, and the Belarusian band Molchat Doma.

Appearances on one of the most famous festival dance floors, the colossal mts Dance Arena, have been confirmed by house diva, fashion icon, and activist Honey Dijon, leader of the global electronic scene and production genius Maceo Plex, Dutch sensation responsible for sold-out halls and the most successful performance at last year’s Amsterdam Dance Event, one of the most sought-after techno producers Reinier Zonneveld, young Brit with an enviable career, musical knowledge and versatile approach to dance music Denis Sulta, representative of the new generation of the Italian techno scene Anfisa Letyago, members of the renowned Afterlife label, techno duo Mathame, and Slovenian house DJ on the rise Brina Knauss.

Satori will provide the artistic notes to this year’s mts Dance Arena line-up, along with versatile multi-instrumentalist and live performer Monolink. A brilliant B2B techno set will be delivered by the queen of the Palestinian scene, the unique Sama’ Abdulhadi, and Anna, who came from Brazil to conquer the global scene. More big names will be announced soon for this year’s Dance Arena!

Grammy Lifetime Achievement Award winner and live punk icon Marky Ramone arrives at the Visa Fusion Stage, accompanied by one of the pioneers of electronic music incorporating Balkan Ethno elements, Djaikovski, leading post-punk dark-wave band, She Past Away, one of the most active and attractive bands in the Balkans — punk-folk band Brkovi, the legendary reunited punk band from Rijeka, Paraf, as well as Prti Bee Gee, Vizelj, Coach Party and Sana Garić.

The Explosive stage is headlined by Bury Tomorrow, Discharge, Incantation, MDB, Nervosa, and Tankard, while the volume dial will be turned up by Architect of Pain, Black Tooth, Chains, Heresy, Madvro, Misconduct, Noctiferia, Oathbringer, Progon, Shining, Stranger, Terminal Prospect and The Understones.

The famous British magazine NME recently nominated EXIT for the Best Festival in the World award! In other exceptional news. EXIT is entering the Metaverse by announcing a collection of special digital art in the form of non-fungible tokens, i.e., NFTs. EXIT’s first NFT collection will be available soon, and it will be created in collaboration with today’s greatest music stars.

Four-day tickets are on sale from 87 EUR +b/f. When this limited contingent is sold out, the ticket price will increase. One-day tickets for Friday, 8th July, including the performance of Nick Cave & The Bad Seeds, are on sale at early-bird prices: regular tickets at 34 EUR +bf, fan pit at 44 EUR +bf, and VIP tickets at 100 EUR +bf. Tickets can be purchased here and via sales locations.