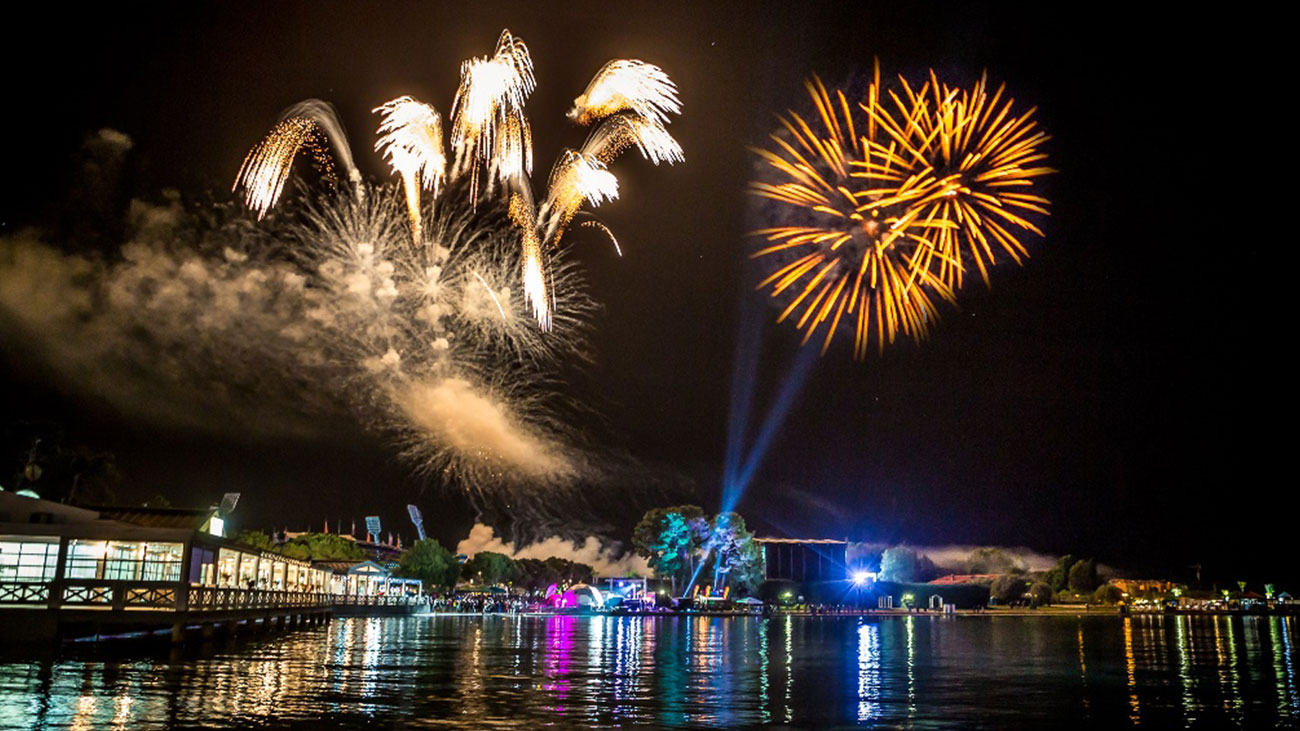 Big regional EXIT Summer of Love has started in the spirit of love, tolerance, music and sport, when the gates of the first Sea Star Festival were opened last night in the wonderful Stella Maris Resort in Umag.

The first part of the opening ceremony was marked by the cyclists who crossed 660km of the road from Novi Sad to Umag in the past 5 days. The friendship of the cities in which all four EXIT’s festivals are held, EXIT in Novi Sad, Sea Star in Umag, Sea Dance in Budva and Revolution in Timisoara, was reconfirmed in the spectacular finish of the opening ceremony in which the national water polo team members from the four countries in the region sent a strong message of friendship and unity! This little regional all-star quartet consisted of Ognjen Stojanović from Serbia, a member of the Serbian national team who won an Olympic and world gold, Miloš Šćepanović, Montenegrin national water polo team goalie and the winner of many medals from all European and world competitions, Jakob Merčep, the best shooter of the current junior world champion, from Croatia and Cosmin Radu, Romanian national water polo team captain and the best shooter of the Shanghai World Championship. After “the mega-emperor of the world”, Rambo Amadeus, welcomed the audience to the coast of the sea lagoon in the center of the festival, the water polo players started the final ceremony by jumping into the water. The water polo ball was brought to them by the cyclists from Novi Sad was covered in signatures of the main Novi Sad, Umag, Exit and Istratourist officials, as well as of the athletes themselves! After the water polo players threw the ball over a ten meter high water spray, a spectacular water hologram appeared in it! This visual performance contained some of the most important messages from the original 1967 Summer of Love, which EXIT stands for even today, 50 years later. In the spirit of the festival at Petrovaradin fortress, the ending of the ceremony was reserved for the first of the two big fireworks of the festival.

Before this, the night of the new EXIT family festival opening was marked by a group of cyclists who crossed 660 kilometers in 4 days, from Novi Sad to Umag, carrying with them an EXIT banner of love, a water polo ball and a gift from the mayor of Novi Sad to the mayor of Umag! The banner of the supranational state of EXIT, three meters wide, featuring a symbol of love and friendship, was brought by Milisav Bosanac, Goran Savuljić, Negomir Gajinov and Boris Novotni. On various occasions during the trip, they were joined by cyclists in Nova Gradiška and Buzet, and in the very end they were joined by runners headed by Dušan Kovačević, the founder and CEO of EXIT and Ronald Korotaj, the Istraturist CEO. At the bridge connecting the two sides of the new EXIT’s festival they were welcomed by mayor of Umag Vili Bassanese and Milovan Popović, TZ Umag CEO, and on that occasion it was revealed that Sea Star Festival, Istraturist and the city of Umag donated 15 euros for each kilometer crossed, and that the total of 10,000 euros was donated for purchasing a new radiography machine for the Umag medical center!

A SPECTACLE FOR OVER 20,000 PEOPLE ANNOUNCED FOR TONIGHT!

Today, the main stage, the Addiko Tesla Stage, joins the festival, and this is where the main stars of Sea Star Festival, The Prodigy, will perform. They are expected to create another historical spectacle together with the Sea Star Festival audience! Famous DJ Mag, in its EXIT festival report pointed out that Prodigy performances in front of EXIT audience are the best in the world and an experience you remember for the rest of your life! Aside from them, Umag will be set on fire by Dubioza Kolektiv, Modestep Live, Umek, Bad Copy, Urban & 4, High 5 & Kukus, Kiša Metaka, Krankšvester, Marina Karamarko, Matter, Vervet and many others.

EVEN THOUGH TICKET PACKAGES HAVE BEEN SOLD OUT, THERE WILL BE ENOUGH ONE DAY TICKETS AT THE ENTRANCE FOR THE ENTIRE NIGHT

The unprecedented interest for Sea Star Festival resulted in all ticket packages being sold out, however, enough one day tickets is still available and they will be sold all night at the festival box offices for HRK 250. The biggest crowd is expected today, so all festival visitors are advised to arrive at the location as soon as possible, and to pick up their wristbands at the exchange spots in the camp or at the festival during the day.

Jeff Mills leads the special No Sleep line-up within the Exit Festival!