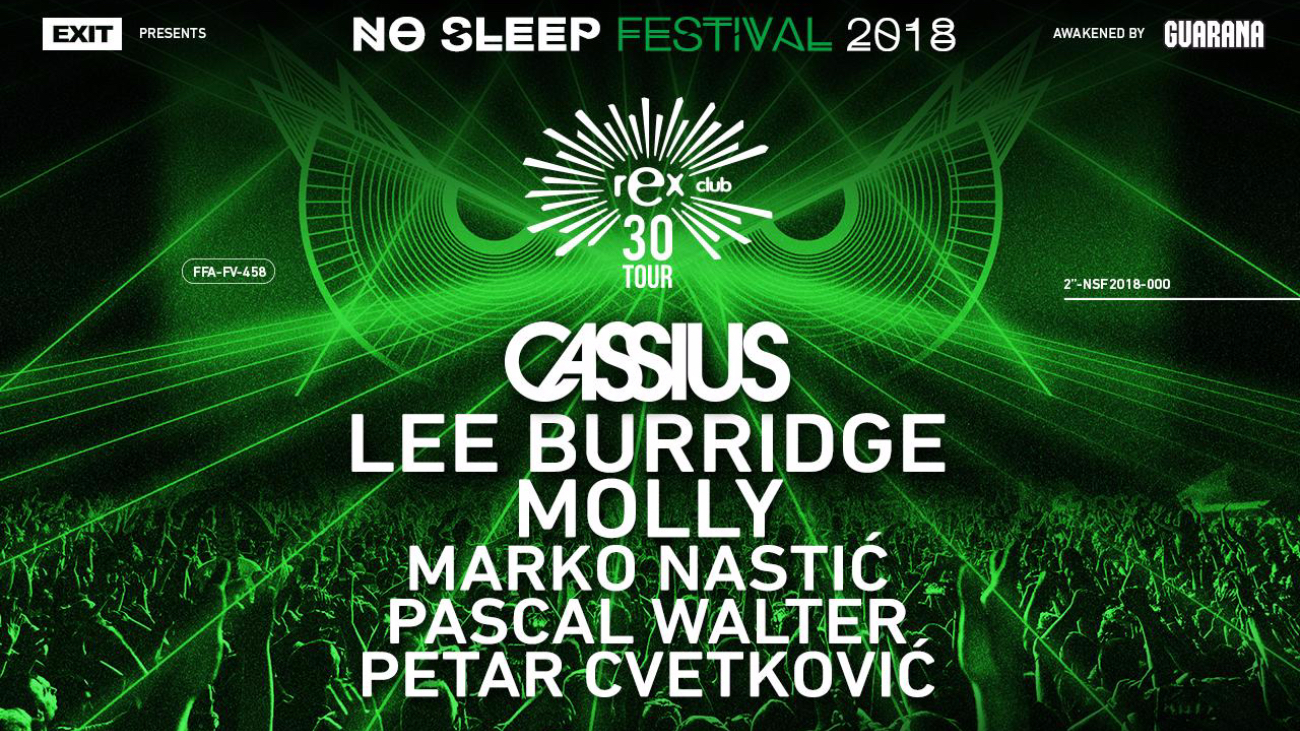 No Sleep Festival, promoted by the team behind the acclaimed Serbian EXIT Festival, will take place in Belgrade from November 15 to 18, welcoming acts like Fatboy Slim, Nina Kraviz, DJ Tennis, Marcel Fengler, Dax J, I Hate Models, Aleksi Perälä and many others. For the festival’s grand finale on Saturday, November the 17th, Rex, the symbol of Parisian nightlife and one of the world’s most famous clubs, will have its big 30th anniversary party at the festival’s main venue!

For this special occasion, they’ve picked performers that people here have been waiting for years, so the third night is to have not one, but two headliners – famous French duet Cassius and the living icon of the electronic music, Lee Burridge! A special guest of Rex club and No Sleep Festival, this legendary English maestro is the creator of what may be the most popular sound on the scene today, which connects house, techno and progressive in such way that it easily moves from minimal to a sound designed for the biggest stages. In his impeccable sets he leads the audience from a hypnotic dance, through real euphoria, all the way to real dreaming, which gave name to his always sold out parties – All Day I Dream (ADID)! From his Tyrant days, a collaboration which consisted of him, Sasha and Craig Richards, to releases for such labels as Global Underground, Innervisions, Hooj Choons and ADID, Lee Burridge remained one of the most influential DJs of the scene, and the famous Burning Man festival today practically cannot be imagined without his sets.

The Parisian duo consisting of Phillipe Zdar and Boom Bass are coming to visit for the first time, with a new album and numbers featuring Pharrell Williams and Cat Power. Alongside Daft Punk and Justice, Cassius are considered to be the most significant representatives of the extremely specific French house school and top stars of Ed Banger, the famous publishing house. They will be joined, also for the first time here, by famous Rex club resident and deep house heroine Molly, as well as the intriguing Pascal Walter, an experienced music selector from France who’s recently chosen Belgrade as his second home. The hosts of this party are Petar Cvetković who will open the event with a minimal deep set, and our famous DJ and producer Marko Nastić who will have the honor of closing the three-day program in New Hangar, the same place where he organized the big Retrospektakl this year and marked his first 20 years on the domestic and international scene.

The current prices for No Sleep Festival are 30 euros for standard tickets and 50 euros for VIP tickets. The tickets are sold online at Nosleepfestival.com website. The festival tickets will be exchanged for wristbands which allow entry to all the parties, during the entire weekend spanning from Thursday evening to Sunday afternoon, from November 15 to 18, at multiple locations in Belgrade, starting from three big parties at the New Hangar at the Port of Belgrade, all the way to afterparties and daytime parties in famous Belgrade clubs such as Drugstore, 20/44 and others.