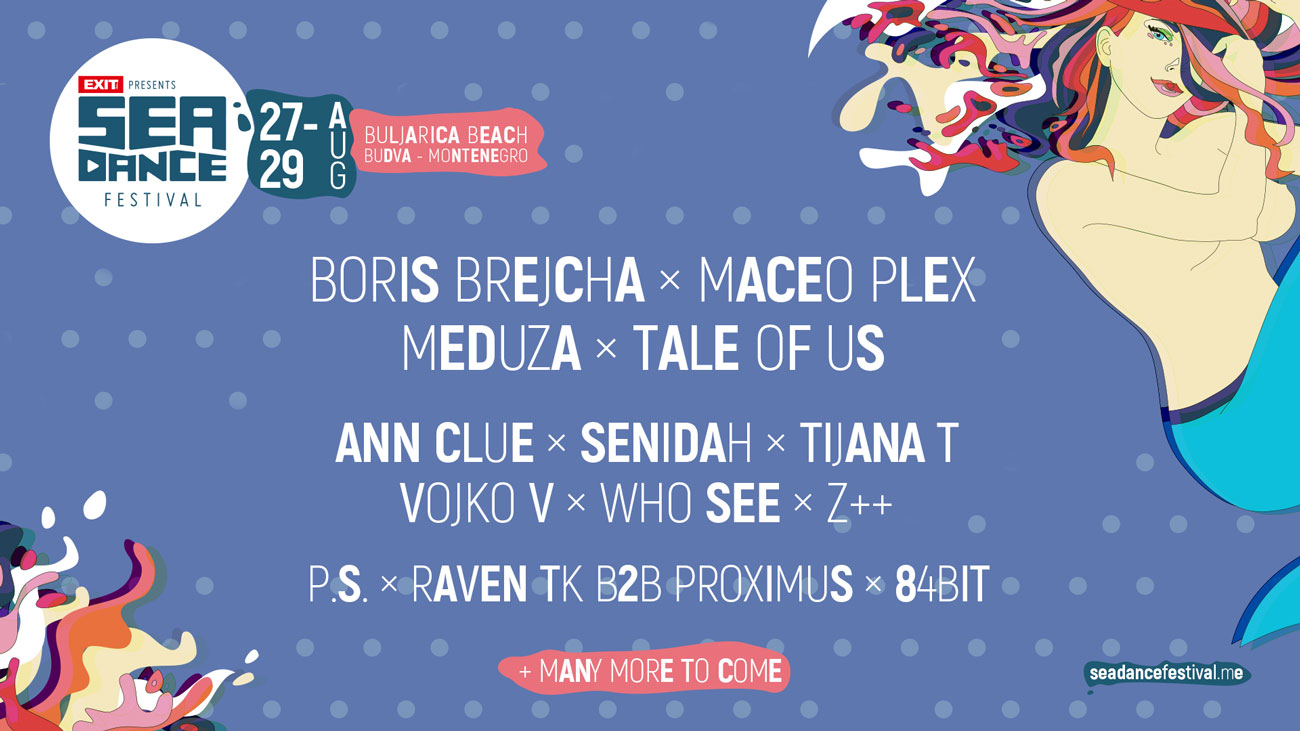 The seventh edition of the festival in Montenegro brings a powerful line-up composed of leading international and regional stars of the electronic and trap/hip-hop scene, led by Boris Brejcha, Maceo Plex, Tale of Us, Senidah, Vojko V, Ann Clue, Tijana T, z++, locals Who See, as well as P.S, 84Bit and Raven TK in a b2b set with Proximus. In addition to the previously announced dates (27th to 29th August), the organizers have prepared another special surprise day, the line-up of which will be announced soon.

With the announcement of the first performers, Sea Dance has already positioned itself as the strongest festival on the Adriatic coast this summer, and the fact that it will go ahead should help restart the festival scene in the entire region. The beginning of ticket sales for the seventh Sea Dance is planned for Thursday 15th July, at a price of 39 EUR + b/f, marking a 40% discount.

“Sea Dance, with its beautiful location, the gorgeous turquoise bay of Buljarica beach, is one of the most remarkable events in our festival family. We have prepared a strong line-up worthy of the festival’s status. Some of our headliners are coming to Montenegro for the first time, and we are particularly looking forward to using Sea Dance as a substantial boost for the relaunch of the festival scene in the entire region. After EXIT, we can’t wait to be reunited with audiences from all over the world, to hang out, celebrating life and freedom”, said Dušan Kovačević, founder and director of the EXIT and Sea Dance festivals.

“Given the number of foreign and domestic tourists who will visit Sea Dance, this event will have a positive effect on tourist traffic, but will also further promote Montenegro as a responsible and safe destination”, said Montenegrin Minister of Economic Development Jakov Milatović.

“The seventh Sea Dance Festival is ahead of us, and we can freely say that this event has become a tradition of the tourist offer of Budva. We are delighted that our guests will have the opportunity to enjoy the music spectacle this year as well. I believe that the festival, as in previous years, will attract guests not only from the region but from various countries around the globe, which is especially important to us at this time when we are trying to recover our tourism sector”, said the Mayor of Budva Marko Bato Carević.

One of the key conditions for the festival to take place is adherence to security protocols related to mass events, which the EXIT festival has successfully implemented in Novi Sad. The festival will be open to anyone who has been vaccinated against COVID-19 at least 14 days before the start of the event, as well as those who can present proof of having developed antibodies or can show a negative PCR test, no older than 72 hours, or a rapid antigen test — RAT, no older than 48 hours.

In the past six years, the Adriatic coast has echoed with hits from megastars such as The Prodigy, David Guetta, Skrillex, Fatboy Slim, Sven Väth, Nina Kraviz, Alice Merton, Richie Hawtin, Jamiroquai, Underworld, Rudimental, Róisín Murphy, Hurts, Lost Frequencies, John Newman, Sean Paul, Robin Schulz, Nile Rodgers, but also the biggest music stars in the region who have attracted close to 300,000 fans of good music from all meridians to Budva. Numerous global media, including CNN, New York Times, Guardian, Conde Nast, Metro, Daily Mirror, Daily Express and others, have recommended Sea Dance as one of the world’s best beach festivals and have advised their millions of followers to spend their vacations in Montenegro, establishing Budva and the Montenegrin coast as an exclusive and modern tourist destination. Sea Dance has brought more than 50 million euros to Montenegrin tourism and economy through its previous six editions.

Ticket Sales Start on 15th July at a 40% Discount

Ticket sales for this year’s Sea Dance Festival will begin on Thursday, 15th July. Tickets will be on sale at the price of 39 EUR + b/f, a 40% discount on the final price. They can be purchased through the Gigs Tix sales network. More information can be found on the official website of Sea Dance Festival. The website of the official travel agency www.exittrip.org also offers tour packages, which, in addition to tickets, contain various options for accommodation and transport.