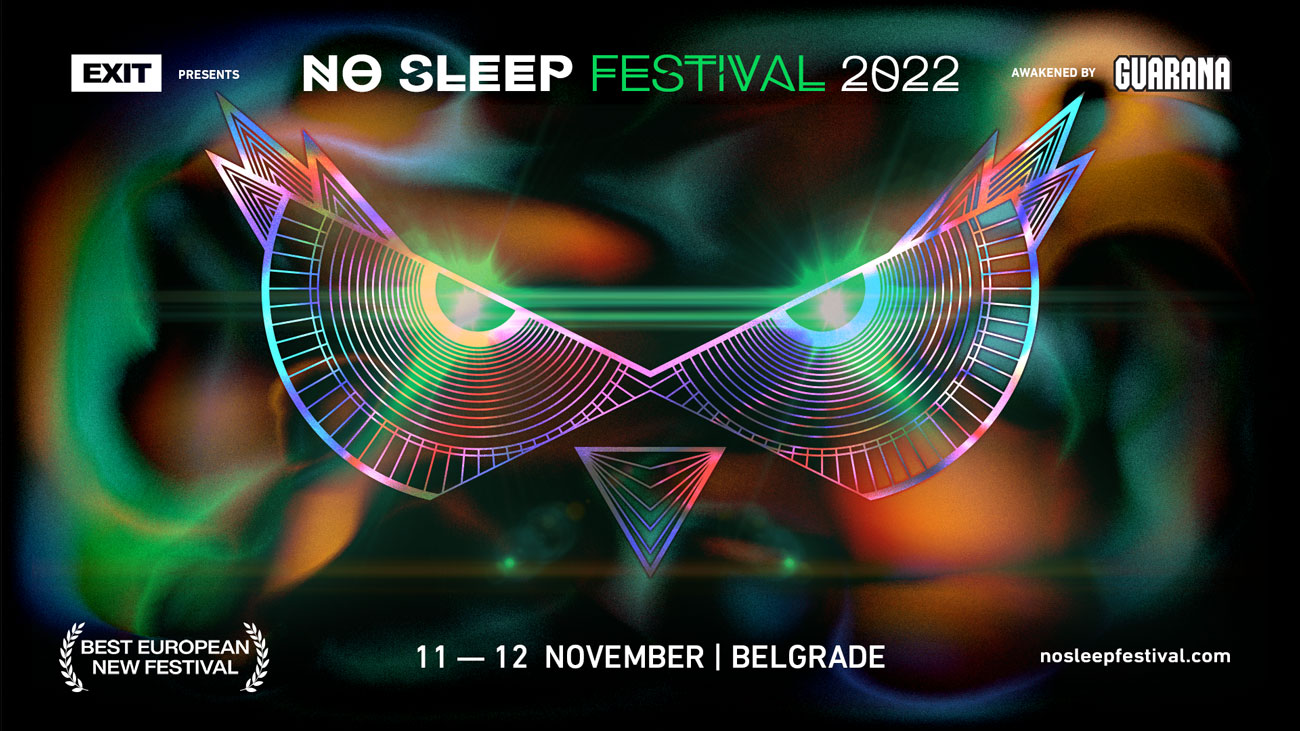 The regular November edition will follow the spring one, where more than 15,000 fans celebrated the title of Best New Festival in Europe. No Sleep will take over the favourite meeting spots in the capital for a weekend and properly close the successful season of EXIT’s festivals.

The news that Amelie Lens is coming to Belgrade’s Main Hangar soon is more than excellent because 2022 has shown that this Belgian techno superstar is at the peak of her creativity and success and has no plans of stopping! In July, she released the EP „In My Mind“ with three tracks carrying her sharp and energetic techno on her Lenske label. Her EXHALE music venture currently consists of the label Exhale Records, a radio show of the same name and a series of events with a recent residency at the legendary club DC-10 in Ibiza. At this year’s Tomorrowland, she had a magnificent live performance and her own EXHALE stage. She is traditionally among the headliners of festivals such as Sonar, Timewarp, Movement and dozens of others.

Amelie has a special relationship with the EXIT festival family – she had her first performance in this region on the No Sleep stage of the Sea Dance festival in 2017, she headlined Belgrade’s No Sleep in 2019, and she is one of the favourite acts on the EXIT Dance Arena. “Energy, passion, techno“is how she described EXIT’s Sea Star festival, where she performed in May this year. Using her decade-long career, influence and natural relationship with the audience, she created the EXHALE raver community, which surely has many members in our region. So, inhale and exhale because Lenske is ready to rock the Main Hangar!

Clubbers worldwide are delighted by the energy and sound brought by Indira Paganotto, one of the most sought-after performers on the underground scene. The charismatic Spaniard’s talent was recognised by Charlotte de Witte, for whose label Indira Panagotto released her debut EP „Himalaya“ – and has been unstoppable since then. She calls her fans “warriors,” and for a good reason – her sets, a combination of techno and psytrance, are an excellent test of the audience’s fitness level. Everyone who attended her first performance in Serbia this year at EXIT’s No Sleep Novi Sad stage knows that. They also know that one of the reasons they can’t wait to hear and see her again is her direct relationship with the audience. She describes herself as a “psytechno warrior to the death,“ and she has her own label called ARTCORE. This year she performed at festivals like Tomorrowland and Awakenings and the Amnesia club in Ibiza. She is yet to do special sets for Mixmag and DJ MAG, and she will also bring her psytechno to London’s fabric. It’s about time for her premiere performance in our capital.

Koboyo will also make his Belgrade debut, bringing an old-school Berlin and Detroit techno spirit with a great groove. His quality caught the eye of Amelie Lens, with whom he shared a set at DC-10 just a few days ago. With the announcement of the first wave of performers, the excitement officially begins for another round of the enormous No Sleep rave that will take over Belgrade!

Anyone ready for another round of No Sleep can buy festival tickets starting September 19th at noon at Super Early-Bird gift prices of RSD 1,990 for regular tickets. These prices will only be valid for 24 hours or until the stock runs out. VIP GOLD tickets will be available at prices of RSD 3,990.

This is the first time we will have two No Sleep festivals in the same year, and the recently released two-minute video recorded at the spring edition shows why one marathon weekend of clubbing has been talked about for months!

The No Sleep festival is realised with the support of the famous Serbian brand Guarana and stands out as one of Europe’s largest indoor electronic music events. It also includes a conference dealing with the hottest topics regarding the music industry.