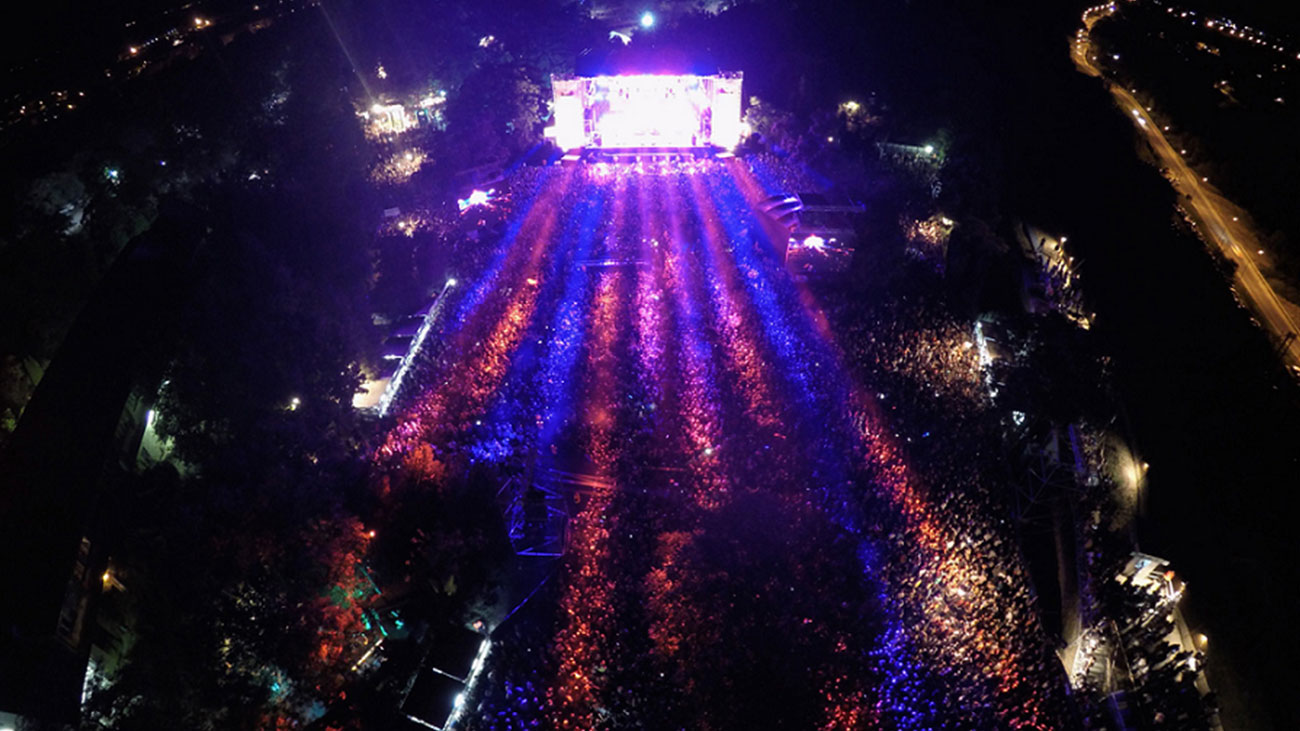 This year’s EXIT Adventure will be written in stone for numerous broken records, milestones and an atmosphere bursting with love, crowned by two proposals at EXIT and Sea Dance Festivals! Apart from the record in total visits in this decade, and the single most visited evening in the history of EXIT, Sea Dance Festival also increased the number of foreign visitors for 70%, with people from more that 40 countries of the world passing through the festival gates. After 190.000 visitors at this year’s EXIT, around 110.000 people were present at Jaz Beach, raising the bar for the upcoming years and new achievements. If we add the following to the batch: the Robbie Williams concert at Ušće in front of 33.000 visitors, the first Revolution Festival in Timisoara for another 12.000 fans, as well as over 70 promo events throughout the region and the big EXIT promo tour in Great Britain, with the main event in the famous Ministry of Sound in London, we get a number of 400.000 people total for this year’s Adventure!

From the audience chanting “Feel” together with Robbie Williams at Ušće, everyone knew that this year’s main theme “15 Years of Sharing Love” will be palpable and very real, only to be nailed even deeper later with Clean Bandit performing the biggest European hit “Rather Be”, when more than 40.000 people knew they wouldn’t want to be anywhere else, but the Petrovaradin Fortress. What’s more, the bar was set higher when the soul diva Emeli Sande opened our hearts with hearts with “My Kind of Love” for one of the biggest performances at the fortress. Motorhead shared another kind of emotion, in a rock’n’roll pilgrimage style, culminating with the ever-popular “Ace of Spades”, only to be continued by Tom Odell‘s piano grandeur who brought Another Love to Novi Sad. Hardwell and Martin Garrix brought another two fireworks at the Fortress by playing energy-packed sets which have been praised for a long time by media such as Independent and DJ Mag! Love was also the central theme at the performance by John Newman, whose “Love Me Again” took the unofficial title of EXIT Adventure’s anthem. Newman continued Skrillex‘s tradition – by partying until early morning hours at EXIT’s Dance Arena!. Although it seemed impossible, Manu Chao broke his own record in Main Stage visits on EXIT’s third evening, that also saw the most people in the history of the festival, so performing “Me Gusta” and “Clandestino” echoed throughout the fortress until the next day. Emotional momentum also came when 500 lanterns were launched in the sky, sending the world an universal message of love and unity. The drivers of the “hippie” EXIT Adventure van and the authors of the best “travel to Jaz” hit were Milky Chance with their “Stolen Dance”, while Capital Cities were the perfect masters of the closing ceremony. We all came 1 that night, after listening to Maxi Jazz preaching the song that will echo in the hearts of tens of thousands of people who embarkled upon a musical crusade only Faithless can lead. Record-breaking nights and mornings at Dance Arena also belonged to stars such as Leftfield, Adam Beyer, Dixon, Chris Liebing, Tale of Us, Octave One, Simian Mobile Disco and countless others.After a two-day break, Sea

Dance celebrated the “Best Medium-sized European Festival” title the best possible way – with a historic concert and a wild explosion created by The Prodigy, when all visitors of the festival became “Voodoo People”! The emotions had not stopped until the end of the festival, and after The Prodigy, people headed on to listen the Slovenian superstar Gramatik, and the next day the parties officially started at the Europe’s most beautiful beach, crowned by the “Lonely Planet” magazine! Parties continued under the sizzling sun with the american collective Crew Love and their duo Soul Clap, whereas the night full of love was crowned with the performance by Rudimental DJ set during which the audience, as a choir, chanted Bob Marley‘s “One Love”! The same tone was heard at Sigma‘s performance, who performed their well-known hits “Changing” and “Nobody to Love”, only to created an overture to the pilots from Flight Facilities with marvellous live vocals! The avantgarde art-disco performance by the modern music diva Roisin Murphy had the best possible finale, reminding us of early EXIT days by singing “Familiar Feeling” that travelled all around the world, carried by Adriatic Sea’s waves. The beach was also shaken by the ever-smiling DJ James Zabiela, whose performance was witnessed by people who completely covered the last grain of sand on the beach. EXIT Adventure’s finale was reserved for Viva Vox choir, Van Gogh, as well as the London hit-maker Mark Wilkinson whose hit “Afterglow” announced EXIT Adventure 2016 in the best possible manner: “Even though the dancing’s done, don’t worry cause the night is young. Who cares where we go, we’re ready for the afterglow“!