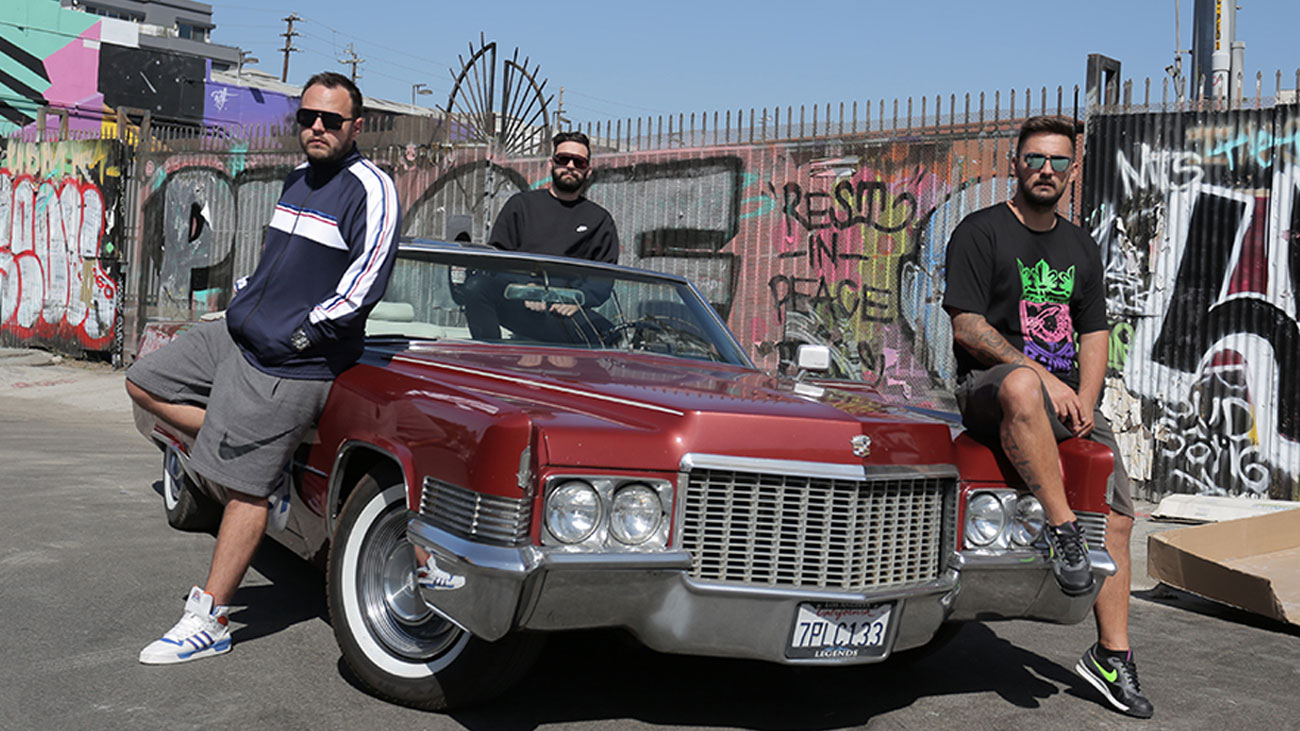 On the Main Stage of EXIT on Thursday, July 7th, MCs who laid the foundations of hip hop in the Balkans and who are now, after several decades on the scene, more active than ever, will face a new, young, trap generation, that creates music beyond any rules, generating millions of streams and does not lift its foot off the gas pedal.

For the first time ever, the legendary and unique crew from different neighbouring countries in the region will run together for 120 minutes, covering everything from old-school phat rhymes to new state-of-the-art rap and preparing a completely new experience — an exclusive concept not yet seen in our country, with performers who will have their Main Stage premieres. The following artists will battle it out on the mic: from Serbia, Ajs Nigrutin & Timbe vs Crni Cerak & Lacku, from Bosnia and Herzegovina Frenkie, Kontra, Indigo vs Muha, and from Croatia Stole vs 30zona! 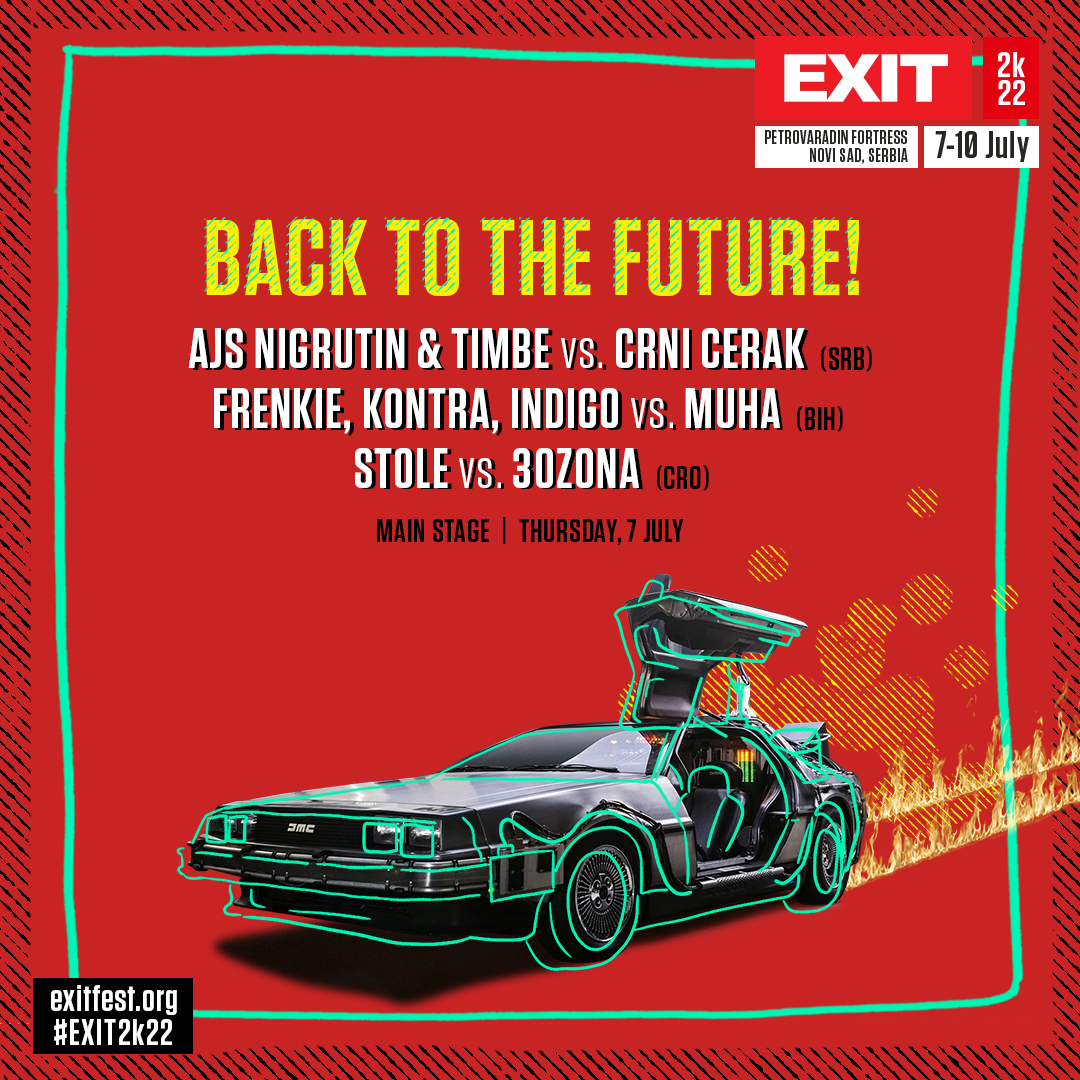 Cult local MCs Ajs Nigrutin & Timbe will bring over 20 years of domination over the domestic hip hop and rap scene. From 1996 until today, this duo has brought the essence of the American West Coast to our region through various ensembles and collabs, as well as solo projects, and paved the way for young generations. With hits like “Papučar”, “Kilo granja lešim”, “Uno Due Tre”, and others, they popularised hip hop in the territory of former Yugoslavia.

Crni Cerak & Lacku are the most prominent representatives of the new trap wave. Over the last three years, Crni Cerak has remained in the top 20 on the YouTube trending list, and today, they’re among the most sought-after trappers in the country and the region. Their track “CC #2” is part of the official soundtrack for the movie “Južni Vetar” and has over 15 million views on YouTube. The super-talented Lacku, through his solo work and numerous collabs with Bombe, Zicer Inc, Seksi, Ludi Srbi and others, has shaped the local trap scene. His debut album “Idealan gas” presented him as a complete music artist and positioned him as a performer with the power to redefine the scene.

Veterans of the Bosnian-Herzegovinian trap scene Frenkie, Kontra Indigo have brought raw rhymes since the beginning of the 2000s. Although they have been performing and collaborating on tracks for almost a decade, their first joint album, “Putanja”, was released in 2017. This and every subsequent project was eagerly awaited, and each received hundreds of thousands of views on YouTube until the next banger.

The young Muha very quickly became an act everyone was talking about. After only two years since the release of her first single, “Sve svojim tokom”, she became the top trapper in Bosnia and Herzegovina, and her performance on EXIT’s Gang Beats stage last year began a spectacle that continued at this year’s Sea Star in Umag. Today, her singles “Svejedno mi je”, “Identitet”, and “Komfortzona” have hundreds of thousands of views.

A representative of the Croatian old school, Stole, half of the legendary duo Nered & Stoka, authors of the album “Spremni za rat”, comes to EXIT with a career spanning 20 years, eight studio albums, and a master craftsman status, which he has had from the very beginning of the regional rap scene. His latest track, “Lekcija”, is an ode to old-school rap and a reminder of the origins of the Zagreb scene that has never been stronger!

The Croatian trap duo 30 zona consists of Shin and Galaš, who have actively represented the new generation of Zagreb rappers since 2018. Their careers are marked by millions of YouTube views and numerous collaborations with artists from the same genre, such as Merula, KUKU$, Mimi Mercedez and others. The track “Pos’o”, which they recorded as the official soundtrack for the movie “Južni vetar”, launched their career. After that, they created another soundtrack, the song “Divlja igra”, this time for “Južni vetar 2”.

With an edition that will bring one of the festival’s strongest line-ups in history and one of the most diverse programmes on the Main Stage, the EXIT Festival “Back to the Future” showcase offers massive support for the regional scene, which must remain connected forever. This is just the beginning of the showcase concept. Above all, the idea is meant to celebrate the evolution of music genres and the contribution of all generations involved.