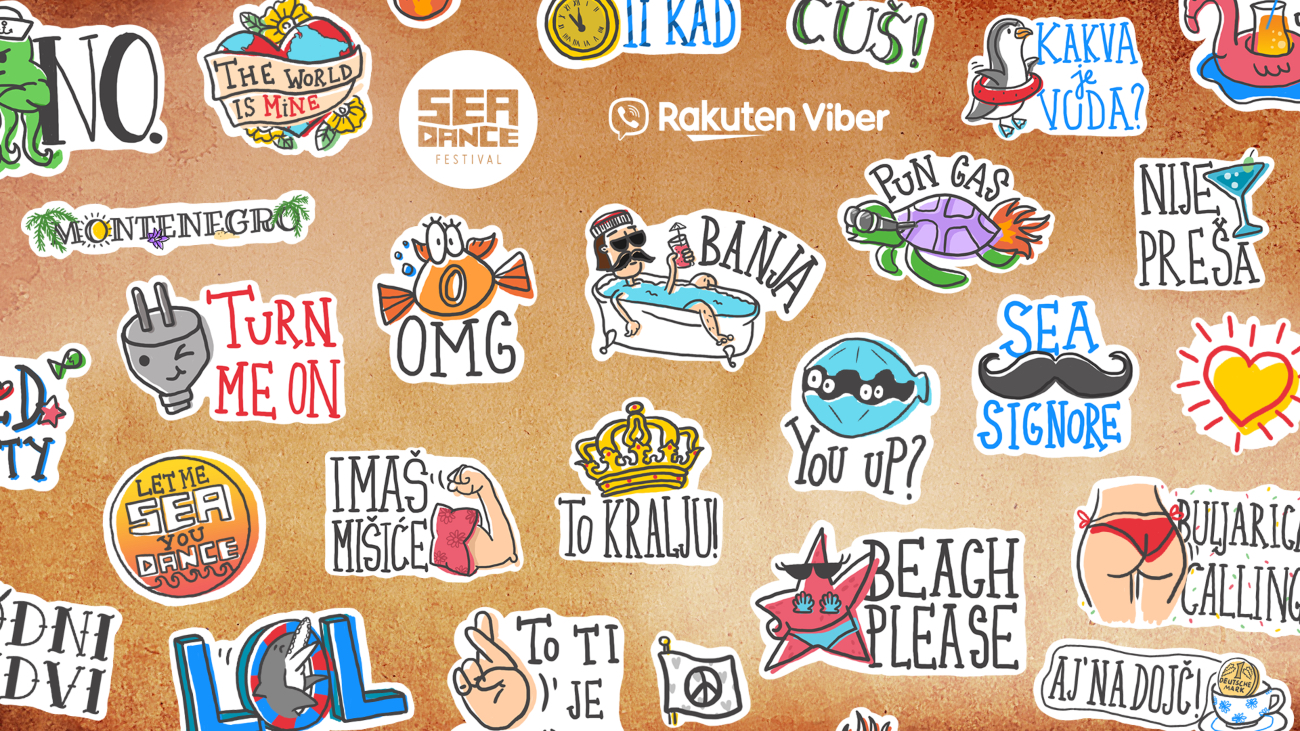 Over a billion Rakuten Viber users from all over the world can display their festival spirit, energy and emotions by sharing free-to-download expressive visuals of the new sticker pack dedicated to the Sea Dance Festival, its striking stars and a unique festival experience amid the beauties of the Montenegrin coast.

By following the official Viber Community of the Sea Dance Festival, fans will regularly receive and be able to share all the latest and the most important information, giveaways and contests, as well as photos and videos as they come out.

Judging by the success of the EXIT Festival sticker packs in the past years, that have been downloaded by 3.5 million users from as many as 174 countries and used over 42 million times, Sea Dance can also expect some high numbers with a global reach. EXIT, as one of the ten most popular brands in the world on Rakuten Viber, alongside FC Barcelona, Coca-Cola and others, has made another significant step towards strong tourism promotion of Montenegro and Budva, because besides the pack in Montenegrin language, there is also a free-to-download Viber sticker pack available in English for users worldwide.

Become a member of the Sea Dance Community on Viber HERE

“As a first tourist organization in Montenegro that launched the destination Viber sticker pack few years ago and recognized the importance of this type of promotion, we consider this to be a great way to promote the festival, and to position Budva at the top of the list of destinations that keep up with the hottest trends”, said Maja Lijesevic, director of the Budva Tourism Organization, welcoming the move.

The irresistible summer illustrations, ideal for everyday interaction, are packed in 27 local and as many stickers in English pack. Those who download them for free automatically become members of the Sea Dance community on Viber, a “supergroup” that is the center of latest festival info and a place to share emotions and experiences of fans, whose numbers are rapidly growing by each day.

“At Rakuten Viber we are enthusiastic about being yet again the official communications platform of the exciting Sea Dance festival, featuring the hippest global music stars and best summer festival audience in magnificent Montenegro! And yet again, we are proud to be able to provide ever more ways to share the spirit of this exceptional event to the festival fans, participants and organizers. Our unique, expressive and free-to-download Sea Dance Viber Sticker Pack and the dynamic and engaging Sea Dance Viber Community present an ideal platform for sharing all relevant festival information, exclusive content and fan experience – for a genuine feeling of creating lasting memories and enjoying the fun and most positive summer vibes in the true Sea Dance Festival style!”, said Daniela Ivanova, Director, Business Development at Rakuten Viber CEE.

Interest in this year’s edition of the festival is among the highest in recent years. The reason, among other things, is that dozens of the biggest global hits are brought to the turquoise cove by their authors, whose list is led by the world’s greatest producer of the 21st century, David Guetta. EXIT’s globally acclaimed Dance Arena stage will take over the Main Stage on Sea Dance with the help from world leading teachno acts such as Sven Väth and Richie Hawtin, while Saturday’s madness comes with German hitmaker Robin Schulz and French rock-house duo Ofenbach! Lineup also features the British house trio Disciples, but also underground electronic heroes such as Helena Hauff, Recondite, Eelke Kleijn, Gaiser, Tijana T, Marko Nastic and many other top acts from all over Balkans such as Darko Rundek, Senidah, Surreal, Fox, Kuku$, Hazze and many more.