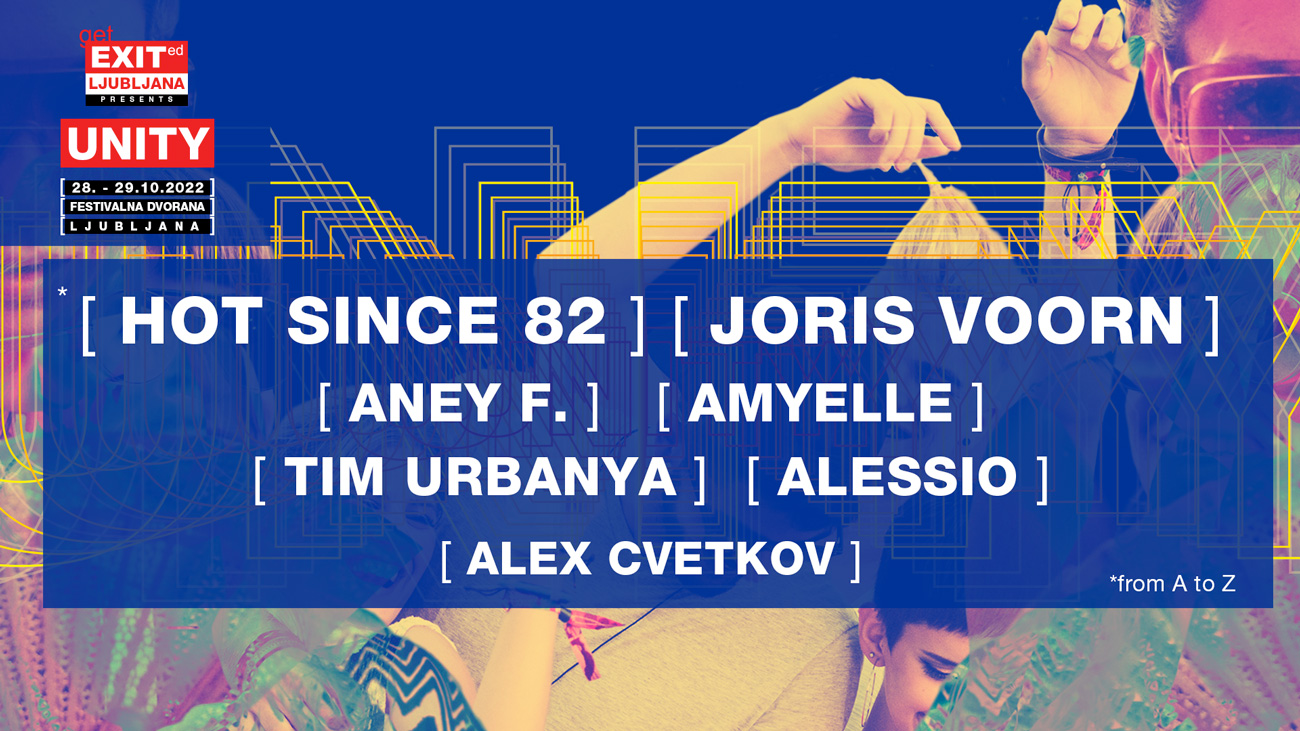 This small festival will be headlined by one of the most successful British DJs, Hot Since 82, and an internationally renowned Dutch techno act Joris Voorn, alongside phenomenal performers such as the Slovenian Aney F., the great AmyElle, Tim Urbanya, Alessio and Alex Cvetkov.

Britain’s Hot Since 82 has created and played music for the past ten years, and his career kicked off with the debut release “Let It Ride“ for Noir Music. This was followed by performances on the world’s biggest electronic music stages and a period of what MixMag called “meteoric success.” Today, critics describe his music as “the most sophisticated in Great Britain.“ He won the prestigious Best Tech House DJ Award and has been nominated numerous times for various other electronic music awards. He found himself among Billboard’s top 10 most wanted producers of all time with his remix of Green Velvet’s “Bigger Than Prince.“ He is known for his live performances at the world’s biggest festivals, accompanied by a string quartet, and he has numerous world tours under his belt as part of his unique club brand TAKEN.

Many think of Amsterdam as the global techno capital, and few artists embody that idea more than Joris Voorn, a producer and DJ who has been at the epicentre of the Dutch electronic music scene for the past two decades. His first few releases, such as the famous track “Incident“ from the 2004 EP “Lost Memories Part 2“, saw him quickly integrated into the sets of the biggest names on the electronic scene, such as Carl Cox, Derrick May and Laurent Garnier. Joris Voorn has four highly acclaimed independent albums under his belt – “Future History,“ “From A Deep Place,“ “Nobody Knows,“ which Billboard named the Electronic Album of the Year in 2014, and the last “\\\\“ from 2019. He is currently working on his fifth LP, which is scheduled for release next year.

Aney F. is one of the most highly sought-after Slovenian producers and DJs, with more than 15 years of experience, a label called Innocent Music, which has more than half a million views on YouTube, and a residency at the legendary Slovenian club Ambasada Gavioli. He has released tracks for prestigious labels such as Subliminal, New State, Inmotion, Moan, Serkal, Deeperfect, and Wiggle, and his talent has been recognised by the biggest names in the industry, including Richie Hawtin, Jamie Jones, Erick Morillo, Marco Carola and many others.

When she signed to the London label Another Rhythm three years ago, AmyElle attracted the attention of many famous selectors. Her debut releases, recognised by the British MixMag, Pioneer, BBC Radio 1 and Sirius XM, also found themselves on the cover of the UK House Music playlist on Spotify, reaching millions of streams. In some of her first performances, she already shared the stage with legends such as Skream, Jamie Jones, Joris Voorn and others in iconic London venues, such as Drumsheds. She also became the first female DJ in the DJ Mix series on the Spotify platform.

The event will be organised in cooperation with the Slovenian agency Supra Travel, which has been with the EXIT festival for two decades – “Get EXITed Unity is the first EXIT festival event in Slovenia after more than 15 years. We decided to place it in the Festival Hall, which has a lot of history, and which will turn into the best club in Slovenia for two days,” – said Supra Travel director Pavle Kostadinović.

“Hot Since and Joris Voorn played some of the most memorable sets at Exit’s Dance Arena and our other festivals and events, making them an excellent choice to headline the Get EXITed party in Ljubljana”, – said EXIT Foundation Board Member Sanjin Đukić.

One-day tickets for Get EXITed Unity will go on sale on Tuesday, September 13th at noon on the website Entrio.si. The fastest fans will have the chance to get their tickets at a promo price of €20 until the limited stock runs out, after which the price will increase. VIP tickets and Hospitality packages go on sale on September 20th.

EXIT is the largest music-industry organisation in Southeast Europe, running nine festivals in seven countries. Aside from the original festival, which has traditionally taken place in Novi Sad for over 20 years, EXIT has so far organised numerous festivals and large concerts, such as the No Sleep festival in Belgrade, Sea Dance and Ada Divine Awakening in Montenegro, Revolution in Romania, Sea Star in Croatia, Echowaves in Georgia, Festival 84 in Bosnia and Herzegovina, Sunland at Perla beach in Bulgaria, concerts by Robbie Williams and Madonna in Belgrade, Red Hot Chili Peppers in Inđija and many others.

The special two-day Get EXITed music event in Ljubljana will also present Exit’s mission, which is based on connecting the region, promoting peace, as well as branding destinations and building their distinctive images.