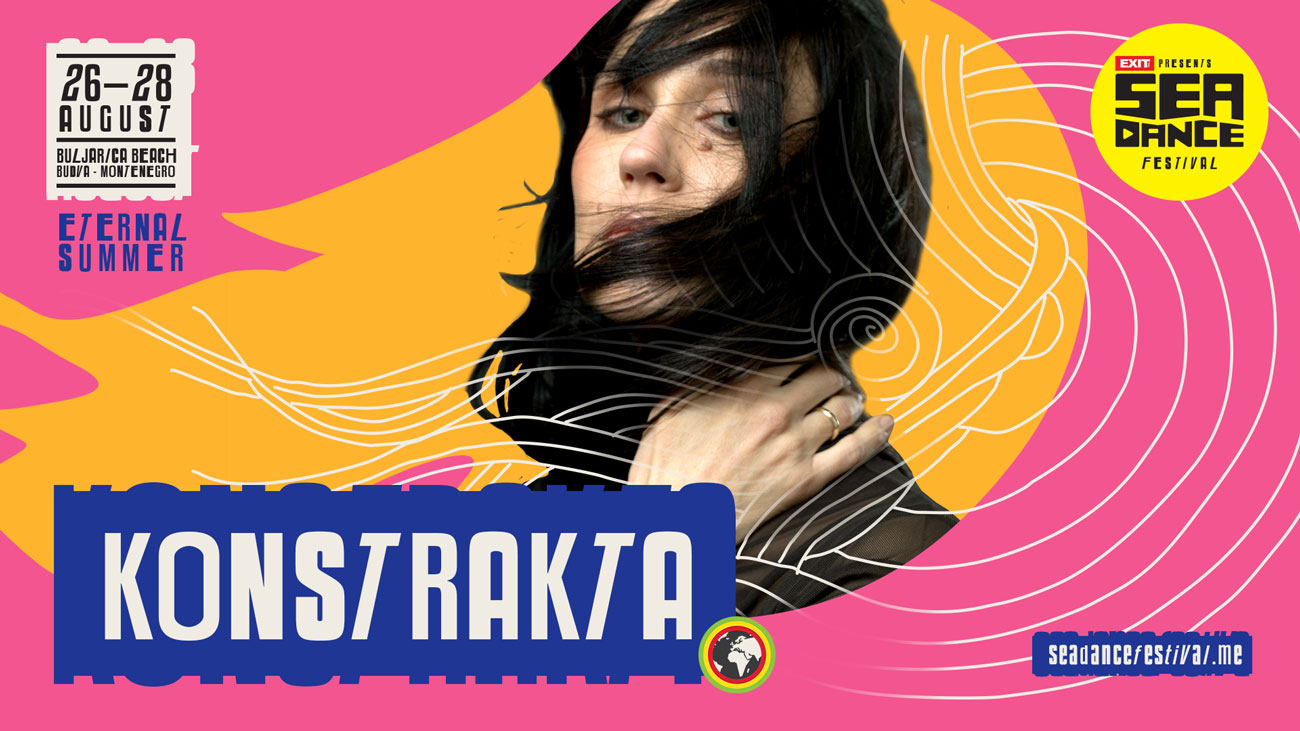 A fantastic trio of headliners will be at Buljarica beach near Budva from 26th to 28th August. The most sought-after musical act in the Balkans, Ana Đurić Konstrakta and the winners of the Eurovision Song Contest KALUSH Orchestra will have their first concerts in Montenegro, while the region’s biggest band in a decade, Dubioza Kolektiv, will rock the Main Stage!

They were presented at today’s press conference in Podgorica, where Konstrakta and Dušan Kovačević, the founder and CEO of EXIT and Sea Dance, addressed the numerous journalists. A limited contingent of the first, most affordable tickets, at the price of €24.99, will go on sale on Friday, June 10th, by which time more performers will be announced, some of whom will also perform in Montenegro for the first time.

Regarding her performance at Sea Dance, Ana Đurić Konstrakta said that she was looking forward to cooperating with EXIT. “I am excited for our first Montenegro performance as Konstrakta to be at the Sea Dance Festival. We performed at Sea Star last weekend, and it was fantastic. I can’t wait to perform at EXIT and Sea Dance. Sea Dance is coming at the end of the summer, and I expect that we will rehearse nicely at the concerts that precede Sea Dance, so this performance will be what I intimately strive for.”

The recently agreed continuation of cooperation and strategic partnership between Montenegro and the Sea Dance Festival showed that the festival in Budva is recognised as one of the key generators for the development of culture, art, and tourism in the country. “Last summer, thanks to our Sea Dance and Ada Divine Awakening, Montenegro was one of the few countries in the world to host festivals, and this summer, we want to break all previous records. Sea Dance is, after Exit, our longest-running festival, and we have invested a lot to ensure that the line-up will be the talk of the region from today until August 28th. We are particularly proud to bring Kalush to the Montenegrin coast for the first time, as well as our long-time friends Konstrakta and Dubioza Kolektiv,” – said Dušan Kovačević, the founder and director of EXIT’s group of festivals. “Some of the world’s biggest stars performed at Sea Dance: David Guetta, Jamiroquai, Prodigy… but I have never seen this many cameras in Montenegro. Ana, thank you.” Kovačević added.

For more than a month now, Ana Đurić Konstrakta has delighted audiences worldwide with the atypical song “In Corpore Sano”, which she performed at the “Eurovision Song Contest”. The song was a complete breath of fresh air and authenticity to anyone who had not previously followed her solo work. “In Corpore Sano“ is part of the Triptih project, which also includes the songs “Nobl” and “Mekano,” with Konstrakta writing all the lyrics. Apart from socially engaged messages, Triptih also brings a visual concept conceived by Ana Đurić, along with Maja Uzelac and Ana Rodić. She had her first performance as Konstrakta at the Sea Star Festival in Croatia, which was the first festival from the EXIT family this summer, taking place last weekend and also featuring performances by KALUSH and Dubioza.

The Ukrainian KALUSH Orchestra conquered the world with their recent victory in the Eurovision final with the song “Stefania,” which Oleh Psiuk, rapper and frontman of the band, dedicated to his mother. It is a massive triumph for the band and the song, which has gained a new, patriotic meaning in recent months. KALUSH are considered national heroes in Ukraine because, with the permission of the country’s government, they dedicated their pre-Eurovision promotional tour to fighting for a peaceful end to the conflict and helping refugees, while Psiuk himself is a volunteer at the humanitarian organisation De ty (Where Are You?). KALUSH was founded in 2019 as a hip-hop trio, but they soon changed their name to KALUSH Orchestra as the number of band members rose. With its specific mix of rap and traditional Ukrainian melodies, the band has shown incredible creativity, releasing two albums and as many as 26 singles!

Dubioza Kolektiv are the most successful music cosmopolitans in the region, with an unchanged attitude from the beginning of their career, despite amassing a vast army of fans across several continents. They are coming to Sea Dance with another excellent studio album, “Agrikultura,” released early May. Still, their set list will undoubtedly include all the biggest hits from their rich songbook. The band has already left its mark in 2022 with long European tours, and the show at the Main Stage on the Buljarica Beach will be one of the few opportunities for audiences to see them live in this region.

A limited number of the cheapest tickets for Sea Dance will go on sale on Friday, June 10th, at a gift price of €24.99 with a discount of as much as 60%. Tickets will be available through this page, as well as through sales networks in Montenegro and online.