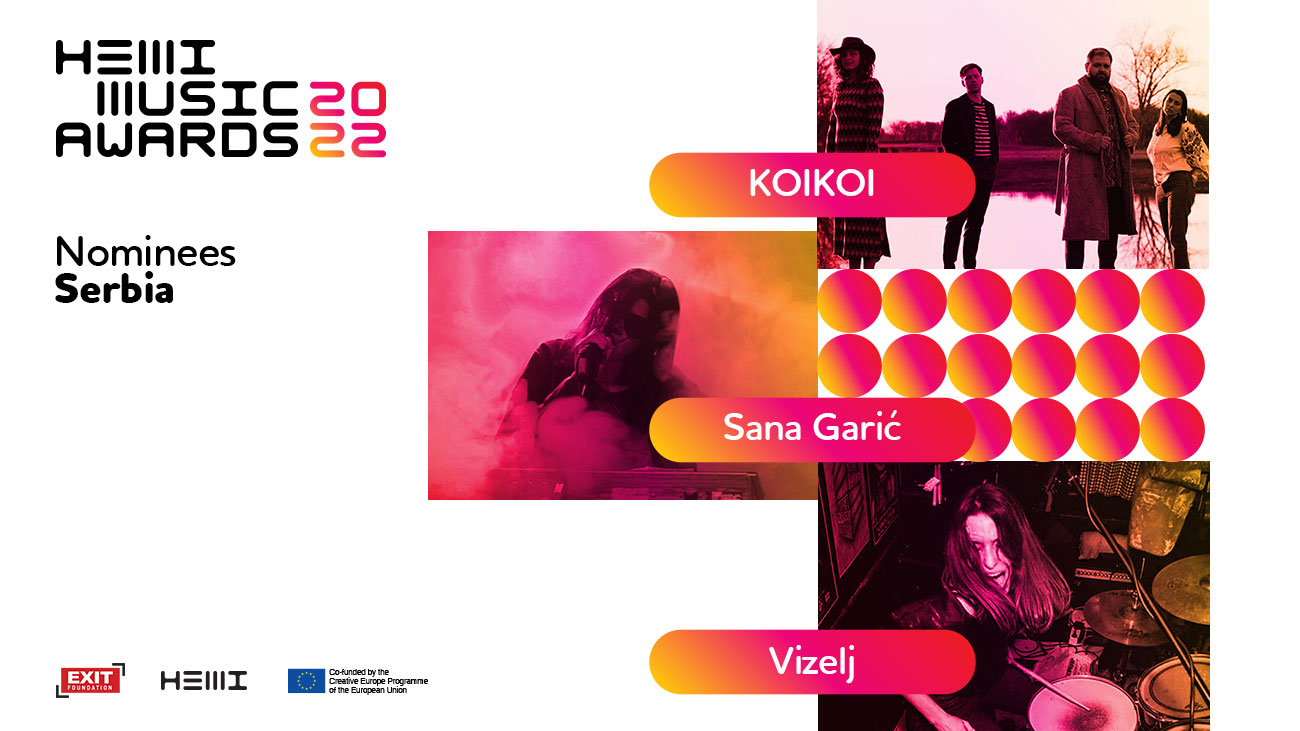 They are among the 27 bands and solo artists from nine Central and Southeast European countries (Czech Republic, Estonia, Greece, Hungary, North Macedonia, Poland, Romania, Serbia, Slovenia) who will participate in the initial phase of HMA (HEMI Music Awards) 2022.

One band from each country will advance to the second phase of HMA and gain personalised support, advanced training, and the opportunity to meet people working in the event and music industries. The winner of the third and final phase of HMA will be presented to an international audience at a major European music festival. Also, this solo artist or band will receive promotional support and the opportunity to take their career to the next level.

Sana Garić is an electropop/art-rock band from Belgrade, fronted by the keyboards and vocals of the eponymous artist. The four-member line-up also includes Miki Ristić on bass guitar, Fedja Tom Franklin on drums, and Dušan Ristić on guitar. The band combines synths and psychedelic melodies with live instruments, and its music carries a nightclub groove, catchy tunes, and unrestrained electropop energy. Various influences are recognisable in Sana Garić’s music, from bands like Videosex, U škripcu, and Denis i Denis to the early phase of Zana. However, their essential authenticity is indisputable both musically and visually. The band was formed in 2016 when they released their debut album “Svet za nas“. Their second LP, “Naočare za srce“, bringing a fresh combination of electronic and dance music genres, pop and art-rock, was released in December last year. The album was produced, mixed and mastered by Radan Đorđević Rahmanee.

In addition to their work in the studio, they have had regional tours and performances at prestigious festivals such as EXIT, INmusic and Nisvill jazz festival. Earlier this year, they represented Serbia at the Dutch Eurosonic Noordeslag, one of the largest and most influential European music festivals and conferences. Frontwoman Sana Garić is dedicated to concert activity, cooperating with other authors and as a solo performer. She also incorporates various forms of visual art into the band’s videos, which she often directs and edits.

They describe their sound using three words: charged, angry, and electric, and anyone who has attended at least one of their performances would say the same. During their gigs, there are banknotes depicting the band members flying into the audience, while Aleksa, Veljko, and Pavle keep swapping instruments. At the show’s peak, it is impossible to tell who is playing, who is using which instrument as a bat, who is in the mosh-pit, and who is on stage.

Their talent was also recognised by the Belgrade singer-songwriter, cinematographer and producer Nikola Vranjković, who said that “Vizelj has something that Šarlo Akrobata and early Azra had“. Their song “Nosorog“ was featured in the TV series “Jutro će promeniti sve“ and a compilation published by PGP RTS. Aleksa Nedić and Veljko Milinković, singers and bass/guitar players of the band Vizelj are also among the organisers of the Hali Gali festival and the homonymous compilation gathering the most relevant young bands from Belgrade.

KOIKOI is a four-member band from Belgrade that combines psychedelic rock with electronic beats, new wave sounds, and ethno/folklore motifs. The band’s members are Marko Grabež (vocals, guitar), Emilija Đorđević (bass guitar, vocals), Ivana Miljković (synths, vocals), and Ivan Pavlović Gizmo (drums and samples). They presented their debut single “Sutra“ in 2019 and released their first album “Pozivi u stranu“ for Moonlee Records last summer. The album has ever since collected positive reviews on the domestic and regional alternative scene. The band’s recognisable musical influences vary from the British band The XX, through Darkwood Dub and Petrol, all the way to Chromatics and DIIV, while their sound is described as “the most tempting different form of pop, with a radio sensibility and rock toughness, always wearing a veil of hypnotic Balkan melodies.”

They had their first regional tour as part of the album’s promotion. They visited Skopje and Ljubljana and performed at the Europavox and HaliGali festivals in Zagreb and Belgrade, respectively. Late last year, they presented their work to a broader audience through an Agelast Session that they recorded at Atelje 212.

Hub for the Exchange of Music Innovation – HEMI

HEMI is an initiative of 10 music organizations from Central and South Eastern Europe (CSEE), co-funded by the Creative Europe programme of the European Union, aiming to develop innovative business models, and support artists and music business professionals to meet current market needs.