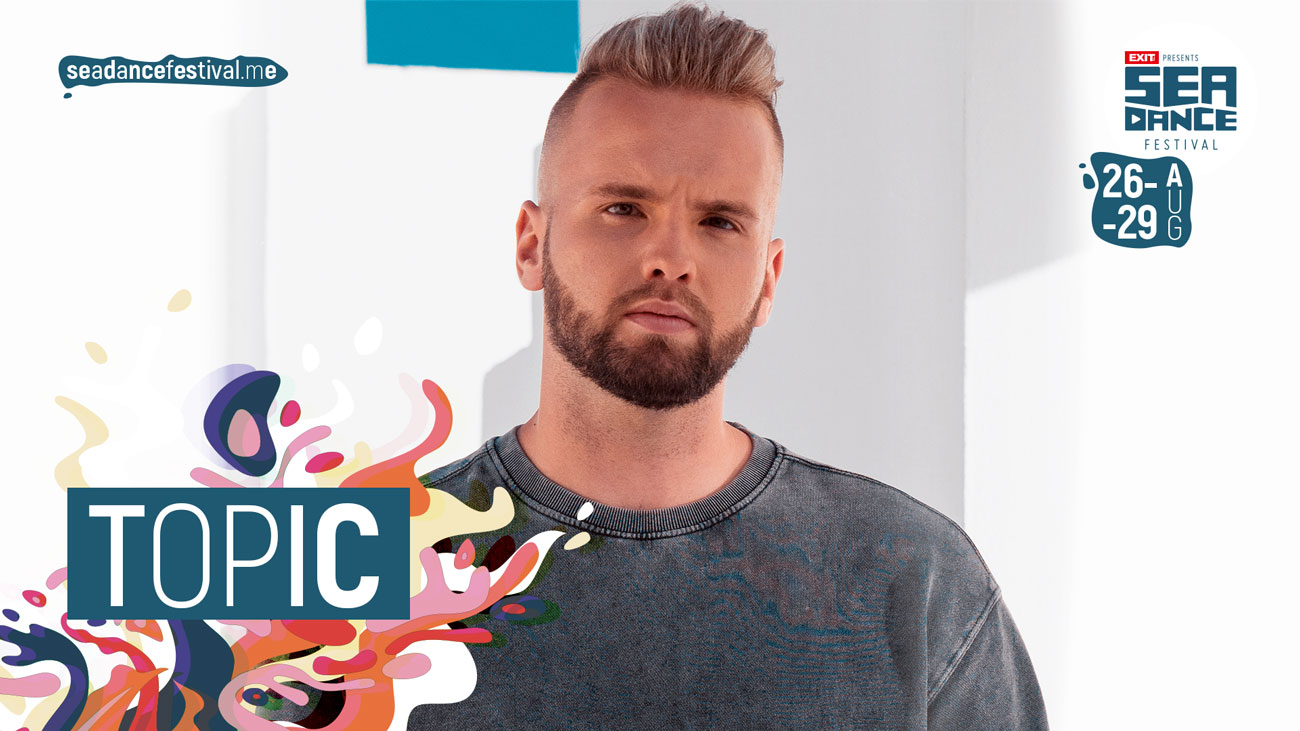 After delighting tens of thousands of fans on the Main Stage of this year’s EXIT, one of the fastest-growing stars of today and a hitmaker whose singles exceed over half a billion views on video and music streaming services — DJ Topic — arrives at Sea Dance as the latest addition to its growing line up.

The biggest festival on the Adriatic coast this summer has been enriched by a lineup already featuring big global and regional stars such as Boris Brejcha, Maceo Plex, Tale of Us, Meduza, Satori, Senidah, Bajaga i Instruktori, Vojko V, Who See, Sajsi MC, Tijana T, and many others.

People’s interest in visiting Montenegro and the beautiful beach of Buljarica near Budva, from 26th to 29th August, already exceeds all expectations, with ticket sales in more than 35 countries around the world. Therefore, the limited supply of tickets at the current price is fast approaching exhaustion and will be on sale no later than Friday 20th August, or until stock is sold out!

Along with completing its lineup, Sea Dance launched “No More,” a campaign promoting vaccination among young people in Montenegro, and set aside more than 1,000 tickets for medical workers and everyone who is vaccinated starting 18th August at official vaccination locations across the country.

The owner of the hits “Breaking Me,” “Your Love,” and “Chain My Heart,” German producer and DJ, who has collaborated with the biggest pop stars in the world — Topic, will perform on the last day of Sea Dance on Sunday, 29th August, on the Main Stage — VISA DANCE PARADISE powered by Budva Tourism Organisation of Budva Municipality. The world-famous DJ and founder of high-tech minimal techno Boris Brejcha and regional stars Who See, Sajsi MC, and z++ are set to perform on the same evening.

Tobias Topic describes his style as dance music with ballad-like lyrics but with beats that make you dance. He says that in his creative process, he first makes the music and only then writes the lyrics that suit it. He is one of the performers from whom much is expected on the house scene in the future, and he has sold millions of songs so far, while his singles have over half a billion views on streaming services. After releasing his debut album “Miles” in 2015, this hitmaker and new audience favourite continued to release singles through collaborations with fellow musicians topping global charts in the process. His platinum hit “Breaking Me” was created in partnership with the Swedish artist A7S, “Your Love” also with A7s and ATB, and “Home” with Nico Santos. This year, he reached the top of the charts again through collaboration with American singer Bebe Rexha on the song “Chain My Heart,” and he recently released the song “Drive,” made with the British electro-pop band Clean Bandit. Topic was nominated for an MTV award in the Best German Performer category. Last year, he performed at DJ Mag’s virtual festival featuring the 100 best DJs, while numerous awards and great performances are yet to come.

Leading international and regional music stars of the electronic, trap/hip-hop, and rock scene will perform at this year’s seventh edition of the Sea Dance Festival, to be held in nine days and last for four days, from 26th to 29th August, on Budva’s Buljarica beach. The VISA DANCE PARADISE powered by Budva Tourism Organisation of Budva Municipality stage will feature Meduza, Satori, Bajaga i Instruktori, Parampaščad, Rudhaman, and Rayo on the first day of the festival Thursday, 26th August. The second day of the festival, Friday, 27th August, will host Maceo Plex, Senidah, Vojko V, Tijana T, Muha, and locals Raven TK in a b2b set with Proximus, as well as Radio Katakomba, while Tale of Us, Fox & Surreal, Klinac, Ognjen and locals Audiostorm, P.S. and O.G. feat. Distortion are set to perform on the third day, on Saturday, 28th August. Boris Brejcha, Topic, Ann Clue, Sajsi MC, Who See, z++, and 84Bit will perform on the festival’s last day, on Sunday 29th August.

Security Protocol for Entering the Festival

One of the key conditions for the festival taking place is adherence to security protocols for the organisation of mass events, which the EXIT festival applied in Novi Sad, but adapted to the conditions in Montenegro. The festival will be open to anyone who can meet one of the four conditions stipulated in the National COVID certificate: proof that the person has been fully vaccinated or received at least the first dose of a COVID-19 vaccine; a negative PCR test no older than 72 hours; a positive PCR test older than 14 and not older than 180 days (proving that the person has already had COVID-19); a negative rapid BAT antigen test, no older than 48 hours.

The United Festivals of Montenegro, led by Sea Dance, Lake Fest, Bedem Fest, and Podgorica Film Fest, has launched a national vaccination campaign, focusing on young people, a section of the population that has suffered a lot over the past 15 months. The physical and mental isolation they have been exposed to is a problem that our entire society must immediately begin to deal with. This campaign starts the fiercest fight to end the pandemic and return to normal life, using the only weapon currently available to humanity — vaccines. The campaign itself is entitled “No More” and is aimed at everyone who misses concerts, festivals, but also normal life in general.

A limited number of tickets for Sea Dance Festival 2021 is currently on sale at a promotional price of 49 € + b/f, at a 40% discount on the final price. One-day tickets are sold at a promo price 20 € + b/f, also at a 40% discount. All tickets are available at the Gigs Tix sales network. For more information, visit our ticketing page. All tickets purchased for the 2020 edition are valid for this year’s festival.