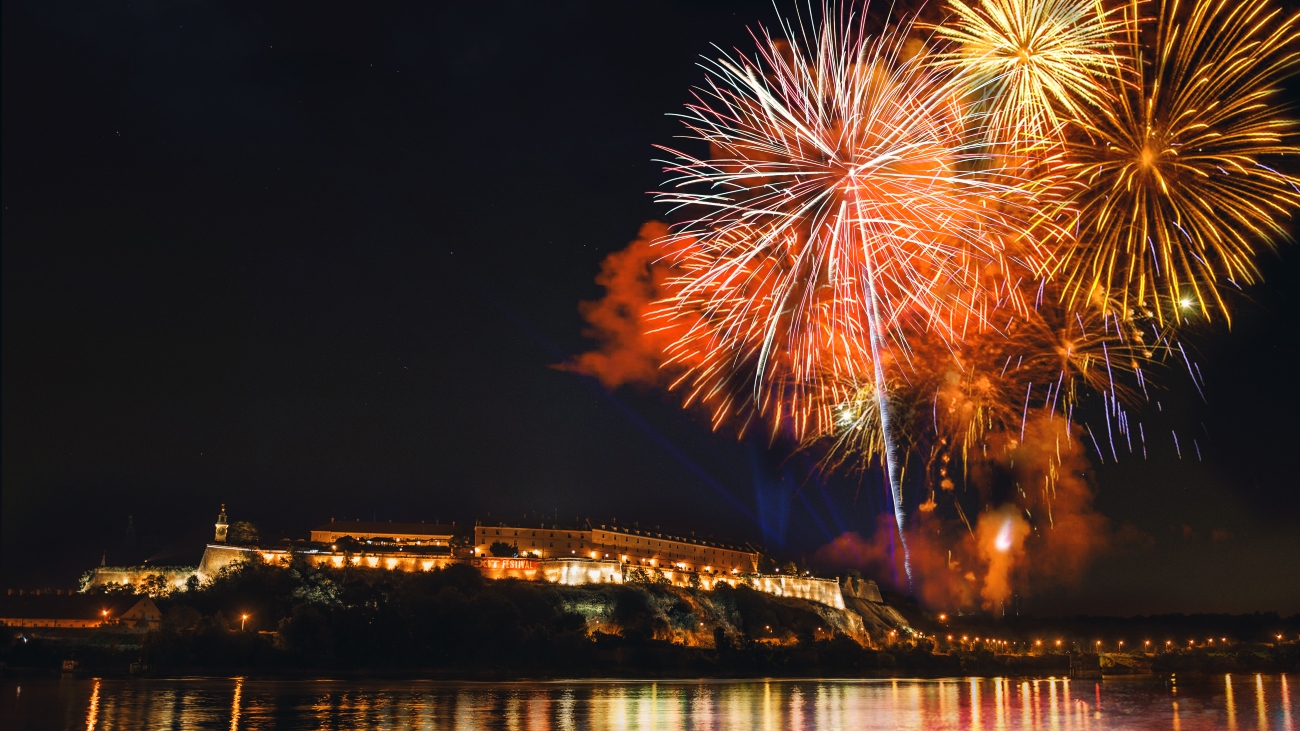 From the very beginning, EXIT had the identity of an event that goes beyond the framework of a music festival, introducing social activism into its essence and inspiring young people to drive change. Social campaigns that highlight the interests and abilities of young people were established and strengthened in the coming years, from 2006 to 2010, when they became the philosophy of the festival and part of the EXIT tradition. During these five years, visitors could hear some timeless global music stars, including Billy Idol, HIM, Wu-Tang Clan, Sex Pistols, Arctic Monkeys, Placebo and many others.

Addressing the public and governments in the region, in 2006, EXIT launched a campaign to abolish visas, which Serbian citizens needed if they wished to travel to almost any other European country at the time. EXIT pointed out that the closed borders turned the Balkans into a kind of ghetto. The desire to enable young people to go out into the world during their university days was at the heart of this campaign.

The European Commissioner for Enlargement, Olli Rehn, came to the festival that year, and the organizers named him an honorary citizen of the “State of EXIT.” Three years later, at a special press conference in Brussels, during which the visa regime for Serbia, Montenegro, and Macedonia was officially abolished, Olli Rehn showed his framed plaque of citizenship of the “State of EXIT.” He pointed out that the plaque was his inspiration during the process of abolishing visas for people in the region. The plaque read: “Honorary citizenship of the State of EXIT does not bind one to do anything but work to make the world a better place with more freedom.” 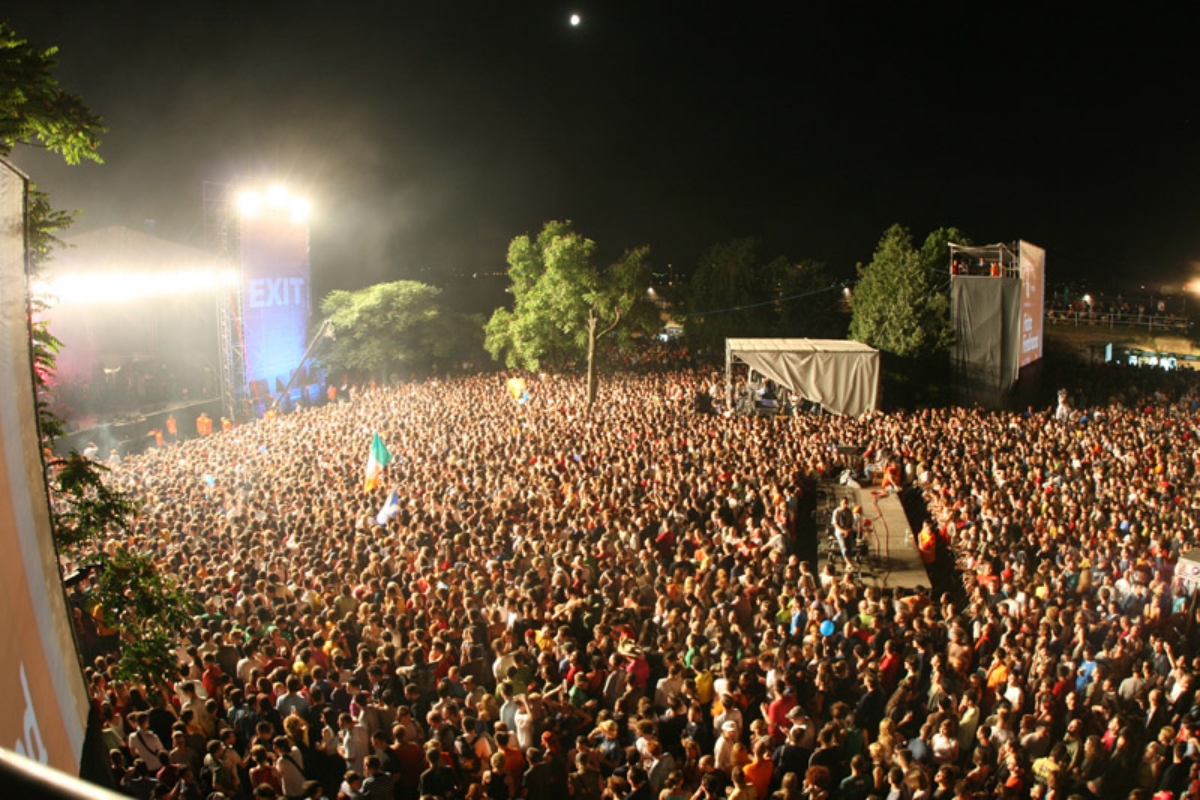 The most notable performers at EXIT 06 included Franz Ferdinand, Billy Idol, HIM, The Cult but also David Guetta, who, as it turned out later, would always happily return to the Petrovaradin Fortress.

The seventh edition of the EXIT festival was marked by the MTV Movement campaign, promoting tolerance and diversity in Europe. The bands Crazy Steps Crew, BBC, Flying Crew, URAN, Sekundarne sirovine and Magic Steps presented hip-hop from the Serbian Roma suburbs, a wonderful mix of traditional Roma melodies and powerful rhythms, with lyrics in Romani, Serbian, German, Swedish, and Turkish on the MTV Movement Stage. The campaign was supported by Tom Findlay (Groove Armada), Rob Garza (Thievery Corporation), Blackstrobe and many others. 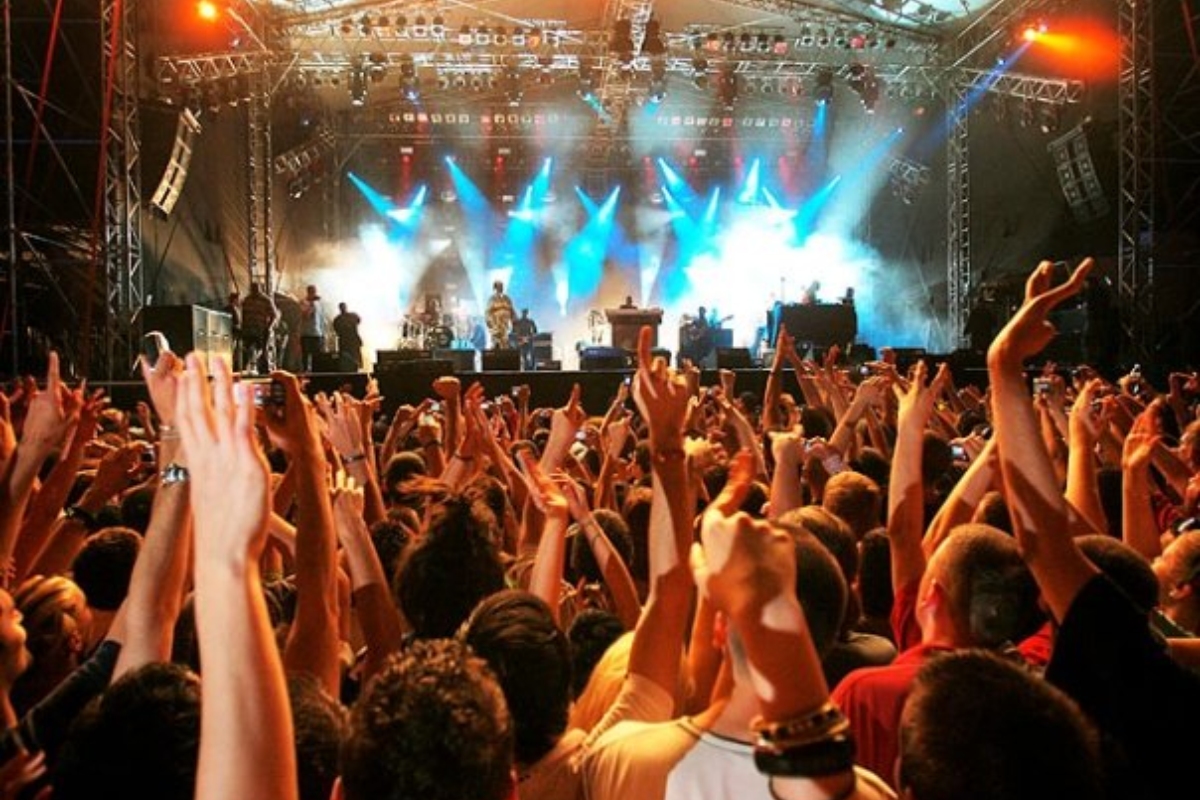 The autumn of 2007 brought an exceptional honour — EXIT was named “Best European Festival” at the UK Festival Awards.

“Find the nearest person you don’t know, look at them, take their hand and say — I love you because this is EXIT” — this was the sentence which the organisers used to welcome the audience to the State of EXIT in 2008. The social aspect of the festival’s eighth edition was dedicated to Serbia’s inclusion into the European Union and aspects of European integration that concerned young people — education, employment, and visa regimes. 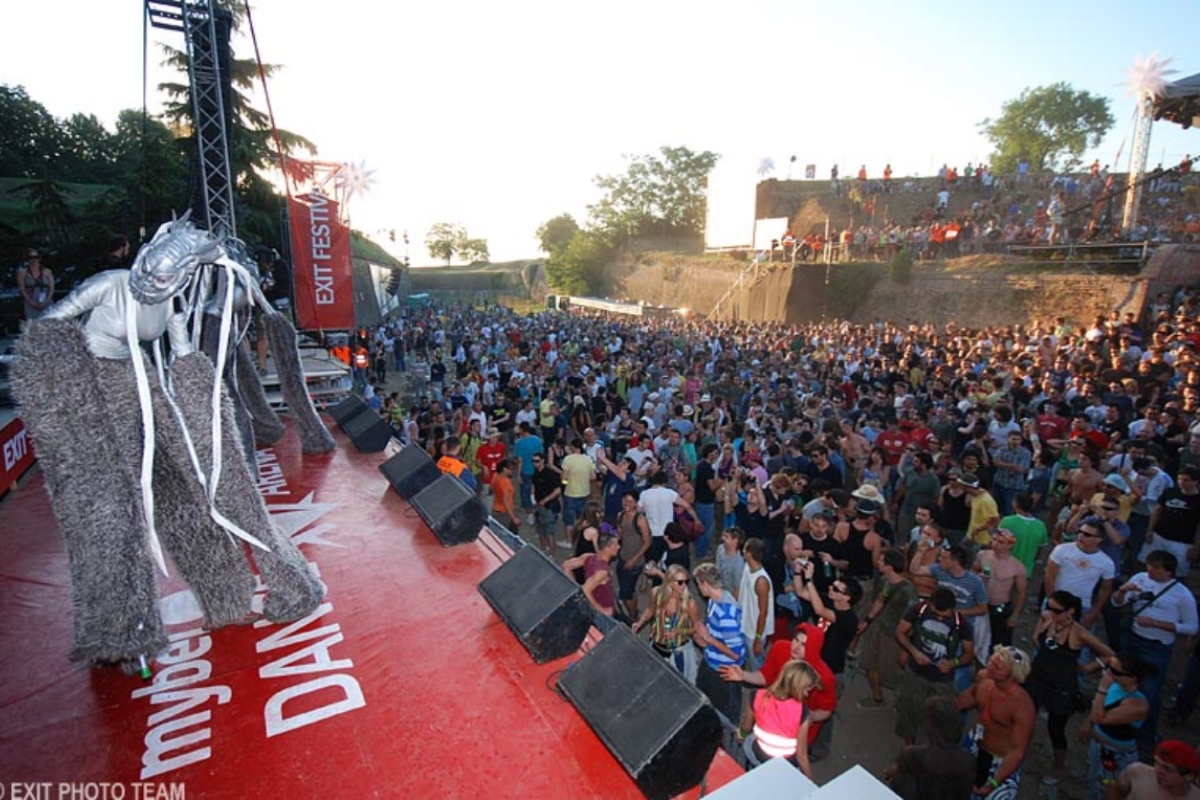 In the same year, the EXIT Foundation was created to initiate social change — connecting young people and aiding their development, promoting peace, protecting the environment, and advancing the creative industries.

Over 600 artists performed on 25 stages during the festival’s four days, and EXIT 08 will be remembered for the performances from Sex Pistols, Marky Ramone, Manu Chao, The Hives and Nightwish.

EXIT 09 was marked by one of the festival’s biggest social campaigns – Green Guerrilla. At the festival, visitors were given EXIT Green Guerrilla Toolkits, which drew attention to the individual responsibility that each of us has in protecting the environment. The package contained reminders to turn off the lights, save water and electricity, and urged readers to ride bicycles and walk as much as possible. It also included graffiti templates, posters, and badges.

The environmental project sought to bring together, inspire and mobilise as many young people as possible, to educate them and provide them with the tools they needed to contribute to solving environmental problems. The Green Guerrilla influenced public opinion and awareness and inspired direct solutions to specific issues, such as high public spending. 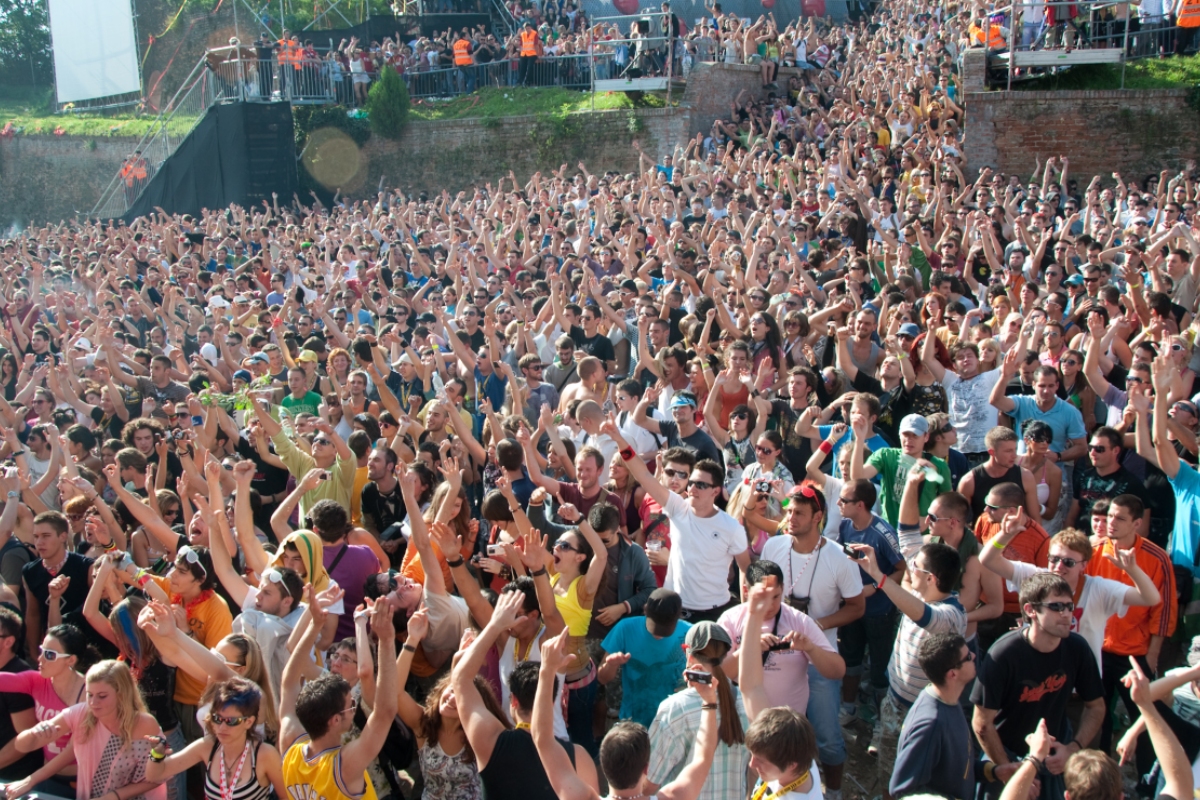 The headliners of the ninth edition of the EXIT festival included Lily Allen, Moby, Arctic Monkeys, Korn and many others.

The jubilee tenth edition of the festival expanded its significance beyond the borders of Serbia. EXIT was recognized as one of the best events in Southeast Europe at the “South East Europe Music Event” held in Sofia. It was also in the top 10 in the “Best Festival Outside the UK” category for the fourth consecutive year at the UK Festival Awards.

Aside from this, EXIT was nominated for the “Best European Festival” at the European Festival Awards for the second time. EXIT 10 was also marked by two critical social projects. The first was securing scholarships for students of the University of Novi Sad, which included support for student projects, financing of study stays abroad, and students’ employment within the EXIT festival. The second was the “Ambassadors of the Region Against Drugs” project, which brought together prominent athletes, musicians, journalists, and other public figures in a campaign to combat addiction. 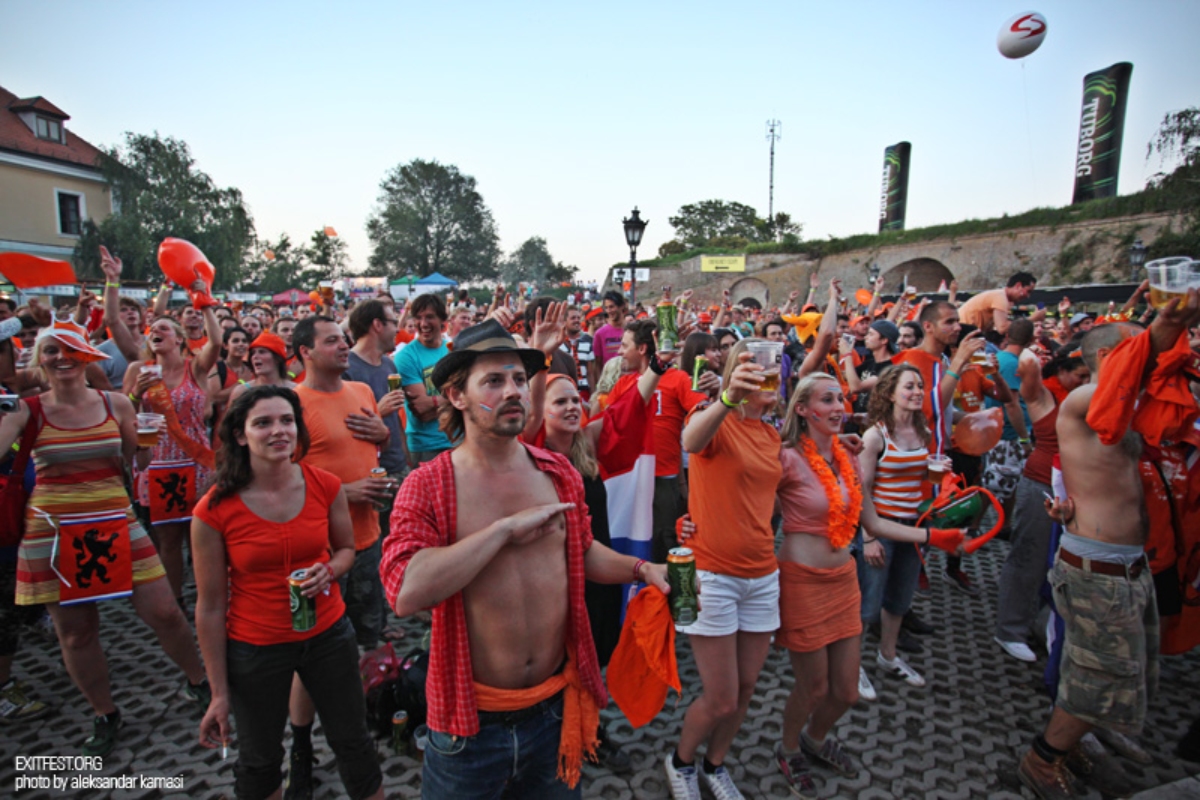 The tenth edition of the festival is remembered for its traditionally strong music program — the headliners included Mika, Placebo, Faith No More, The Exploited…

“EXIT Through the Years: 2006 – 2010” is the second in a series of weekly articles through which we get acquainted with the history and evolution of the festival from its inception until the present day.

Read the first part about EXIT starting period from 2000 to 2005 on this page.

Continue reading about EXIT journey through the years 2011-2015 on this page.